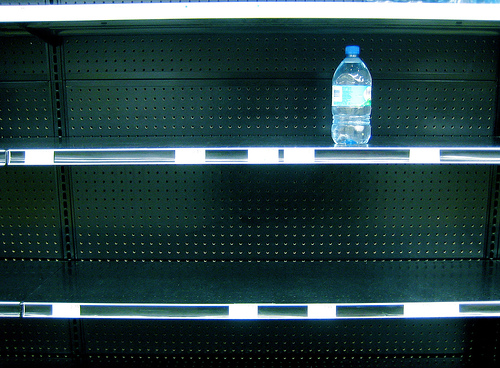 Drinking water poses a threat due to possible perchlorate contamination and BPA leaching from plastic, but it seems reasonable to assume that in the United States, bottled water is free from fecal matter.  Yet until now, there were no requirements to test source water — 70% of which comes from the the same place as tap water.

Beginning December 1st, “bottled water containing E. coli will be considered adulterated,” says the US Food and Drug Administration.  You don’t say?  It doesn’t seem as though we’d need a press release to tell us that, but this is the FDA we’re talking about.

The new FDA ruling will mandate producers to test all source water for the presence of fecal cloriforms — in plain English, animal or human waste.  Bottled water already undergoes such tests, but now, if source water is found to be contaminated, it will be “prohibited from use in the production of bottled water.”

Zero tolerance for the presence of E. Coli bacteria in drinking water is not a new concept.  The Environmental Protection Agency’s Drinking Water Standards established such guidelines in 2006 — but it’s taken the FDA three years to get on board. Perhaps that’s because they’ve been too busy accusing Cheerios of being a drug.

Image via MisterWindupBird on Flickr under a Creative Commons License.