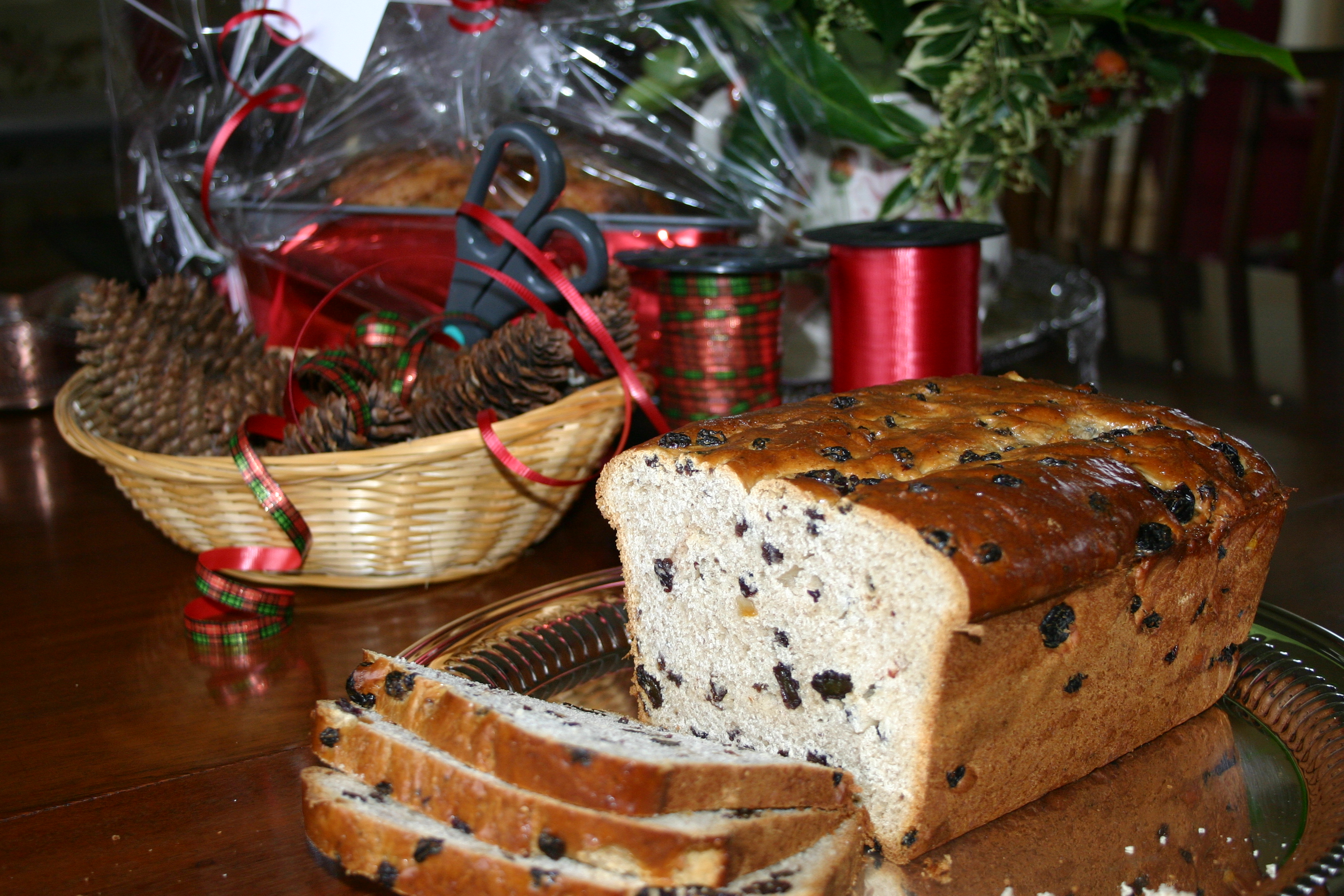 This food memory and Christmas recipe for Yule Bread is from Anne Willan, founder of the legendary LaVarenne Cooking School.

I grew up in northern England, the only child in a small family, so celebrations were important. My Aunt Louie, a classic dowager with an imposing bosom and piled white hair, was in charge of Christmas Eve. The menu never varied – Stilton cheese, frumenty, a curious porridge of whole barley flavored with cassia (a strongly flavored type of cinnamon), and homemade Yule bread. A slice of ham might be inserted for my father who regarded porridge as infant’s pap, but basically that was it. Yule bread was the first candidate for attention. This would be my aunt’s personal gift to friends and neighbors. Towards the end of November when the new dried fruits of the season appeared, she would assemble appropriate (mountainous) quantities of dark raisins, tiny piquant dried currants, and luscious candied orange peel. Baking day began early, for the stove must be fired up to achieve a generous but not scorching heat (no thermostats in those days). The bread dough, raised with yeast, could take three hours to double in bulk in the gentle warmth of the stovetop. Meanwhile I helped pick over the fruits, discarding the occasional stalk, then tossing in flour so they would cling when mixed with the sticky dough.

At least a dozen loaves was our target. I would plunge my arms to my elbows in the fragrant, yeasty dough, so warm it felt alive, first helping to mix and knead, then squishing in the fruits with my fists. My aunt, her hair firmly anchored with pins and tweed skirt wreathed in a white apron, would shape the loaves, patting out a portion of dough and rolling it to a cylinder before lowering it carefully into the buttered pan.

Baking was another skill. First Aunt would estimate oven temperature by inserting her hand, then crosschecking against the time it took to brown a piece of newspaper (one minute was the aim). Shelves were adjusted just right. During cooking, the pans had to be rotated for even browning, working fast so as not to lose the precious oven heat. Towards the end of baking, my aunt would apply the classic test of tapping the bottom of each loaf with her knuckles – I soon learned to recognize the classic hollow echo of the perfectly cooked loaf.

When cool, the loaves were wrapped in brown paper, to be stored side by side in giant cake tins for several weeks, the longer the better for the fruit to mellow and the butter to work its magic with the spices. Finally, shortly before Christmas, came the wrapping and ribbon. Aunt Louie and I would pile into the car and start our tour of knocking on doors. We were invariably expected. There would be cups of tea, scones or currant buns, an exchange of parcels, and always one for me. Anonymous overnight delivery will never have the same impact.

Anne Willan’s latest book, One Soufflé at a Time: A Memoir of Food and France, published in 2013 by St. Martin’s Press, received the award for best Literary Food Writing from the International Association of Culinary Professionals. You can learn more about Anne Willan and her books at www.LaVarenne.com.