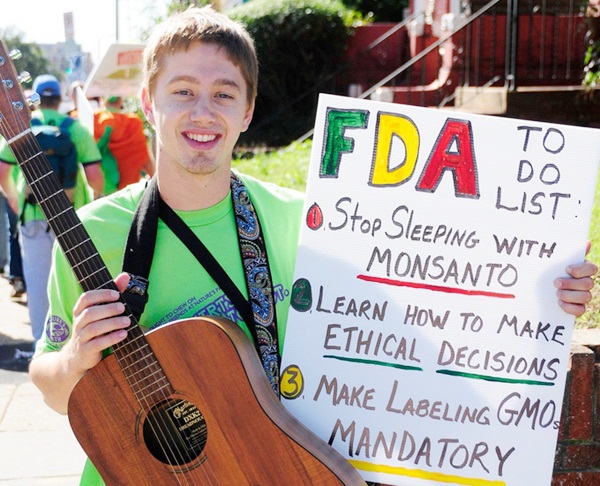 Big Food’s defeat of Prop 37 cost them dearly, and only energized the labeling movement across the nation. Now they’re meeting to talk about GMO labeling at the federal level — but is it just an attempt to preemptively weaken future labeling laws?

Last November, a coalition of biotechnology companies and food manufacturing companies spent around $45 million to defeat CA’s Prop 37, which would have required mandatory labeling of foods containing genetically modified ingredients. They were successful by a very narrow margin, but almost immediately WA took up the labeling issue, along with about 20 other states. Most people in the US support GMO labeling, and the issue doesn’t seem to be fading away like Big Food wishes it would — if anything, labeling efforts have intensified since Prop 37’s defeat.

So Suddently the Food Industry’s Pro-Labeling?

“With Washington State on the verge of a ballot initiative that would require labeling of some foods containing genetically engineered ingredients and other states considering similar measures, some of the major food companies and Wal-Mart, the country’s largest grocery store operator, have been discussing lobbying for a national labeling program.”

Executives from about 20 major food companies including Pepsi Co., ConAgra, and other big grocery players attended a Washington meeting last month with labeling advocates, to cuss and discuss GMO labeling options at the federal level.

“Preemption simply means that a higher law trumps a lower law: so federal trumps state, and state trumps local. But in practice, it’s industry’s way of ensuring uniformity and stopping grassroots efforts. How I do know this? From years of experience of seeing it happen in various public health issues. It’s such a huge problem that the Robert Wood Johnson Foundation funded an entire project called “Preemption and Movement Building in Public Health” to educate advocates about how to handle it.

Here is the pattern: A grassroots effort builds over time to enact local or state laws (such as gun control, indoor-smoking laws, or restricting alcohol sales), and industry fights these efforts for years, until they can no longer win. At that point, industry lobbyists turn around and either get their own weak bill passed, or work with advocates to pass a compromise version. In exchange, this law will preempt or prevent any state or city from passing a different or stronger law. Forever.”

Even in Monsanto’s back yard, politicians know which way the wind has begun to gust: Senator Jamilah Nasheed, who represents Monsanto’s home territory of St. Louis, recently introduced a bill that would require labeling of genetically modified meats. Quoted in the NYT article linked above, the Senator asserts:

“I don’t want to hinder any producer of genetically modified goods… However, I strongly feel that people have the right to know what they are putting into their bodies.”

As a sign of the times, that’s incredibly telling! I think both politicians and food industry executives are slowly-but-surely realizing that this tide has turned, and that we WILL see mandatory labeling of GMO products in the US within the short-term future — one way or another.

Walmart et al may finally be willing to recognize (and act upon) public demand for GMO labeling; so far, so good! But we need to watch unfolding developments on this front with a critical eye: don’t be fooled into thinking that industry’s goals necessarily serve ours.