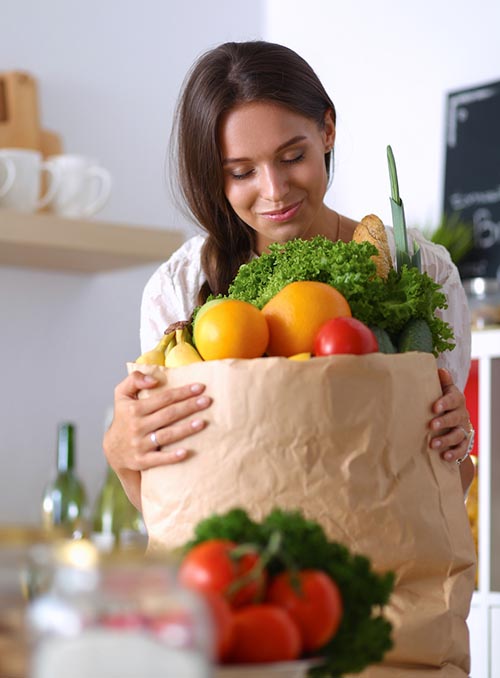 People who eat vegan average half the carbon emissions of meat eaters, according to a recent study. Our modern lifestyle is packed full of behaviors and habits and products that have high carbon emissions attached to them, so there are plenty of areas in our lives that we can address and reduce our own personal carbon footprint.

We can reduce phantom (vampire) power draws in our homes, we can upgrade to a smarter thermostat, we can shade or insulate our homes better, we can ride our bikes for transportation, or carpool with others, and we can consider renewable power options, such as solar, for our electricity needs.

All of those are effective at reducing carbon emissions in their own way, but there’s one overlooked carbon footprint connection that many people don’t make, as it’s somewhat invisible to us. Our diet, which includes the types of foods we choose to eat, and where those foods come from, can have a big effect on our carbon footprint, so changing it to something a little more planet-friendly can effectively reduce our diet-related carbon emissions by as much as half.

A recent study published in Climatic Change, which looked at the eating habits of more than 55,000 people in the UK, and then calculated the greenhouse gas emissions related to those diets, found that the difference in carbon emissions from a standard diet with high amounts of meat, and that of vegetarian and vegan diets, was enormous.

In other words, the greenhouse gas emissions from the diet of meat-eaters is about twice as high as that of vegans, which means that by cutting meat out of the diet (or even cutting back on the amount of meat eaten each day or week), carbon emissions related to diet can be effectively reduced.

“Analysis of observed diets shows a positive relationship between dietary GHG emissions and the amount of animal-based products in a standard 2,000 kcal diet. This work demonstrates that reducing the intake of meat and other animal based products can make a valuable contribution to climate change mitigation.”

While this isn’t exactly news, as the connection between diet and carbon emissions has been discussed many times before, the new study is said to be somewhat unique, in that it breaks out the differences between the diets of those who eat lower amounts of meat, or who only eat fish, but not other meats, and those of vegetarians and vegans. As you can see in the carbon equivalents reported in the study, if the only meat you eat is fish, then your CO2 emissions drop to just above that of vegetarians, and if you cut back from a high level of meat consumption to one of less than 50g per day, you can slash your dietary greenhouse gas emissions by a significant amount.

The study is available here: Dietary greenhouse gas emissions of meat-eaters, fish-eaters, vegetarians and vegans in the UK

Republished with permission from Planetsave; veggies image via Shutterstock.