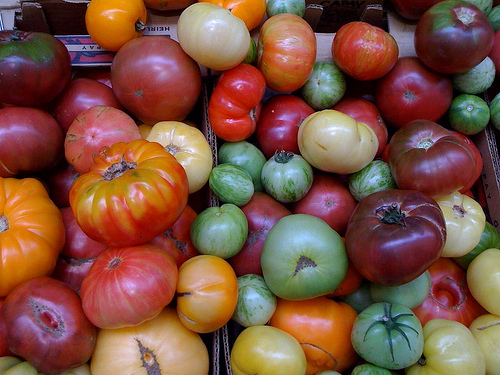 Food biodiversity loss is a disturbing trend that began around the turn of the last century. What can we do to ensure the future of our food supply?

At the turn of last century, farmers and gardeners could choose from hundreds of varieties of seeds to grow various food plants. Today, those numbers have dwindled to as little as 12.

Biodiversity is important for pest and disease resistance. When you plant a variety of types of, say corn, it’s harder for a single problem to wipe out your whole crop. Thanks to industrial farming, we’re losing that precious biodiversity.

We’ve shared this graphic from National Geographic before, but the folks at ProPublica included it in their list of best reporting on food safety, and I thought it bore sharing again.

Preserving Biodiversity in Our Food Supply

Our food supply’s dwindling biodiversity is a systemic problem, but as consumers there are some ways that we can vote with our wallets and show producers that we want more variety.