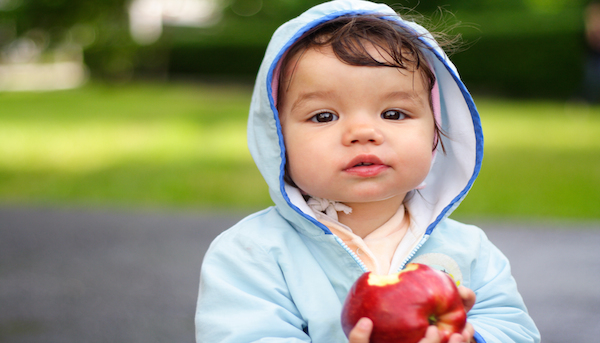 The food baby eats, just like adults, hinges on the economic divide and socioeconomic class. That’s the finding of a new study out of the University at Buffalo School of Medicine and Biomedical Sciences. And these economic choices may impact their health and eating habits later in life.

According to the Washington Post, there were noticeable differences in the solid food choices for babies depending on their socioeconomic class. “Specifically, diets high in sugar and fat were found to be associated with less educated mothers and poorer households, while diets that more closely followed infant feeding guidelines were linked to higher education and bigger bank accounts.”

Using data obtained from the Infant Feeding Practices study, which tracked the diets of 1,500 infants to age one, the researchers looked specifically at weekly diets at ages 6- and 12-months, with follow ups at age six. “We found that differences in dietary habits start very early,” said Xiaozhong Wen, the study’s lead author.

Many of the lower economic class of infants were being fed “Candy, ice cream, soda, and french fries,” at those early ages, reports the Post, choices, “that would surprise even the least stringent of mothers.” Wen called the unhealthy infant diet patterns among this class “substantial.”

Not only do these diet choices rob children of the nutrients they need for optimal development, they also lead to early weight gain and stunted growth. “Larger weight increases were observed in the infants who consumed higher levels of fat and sugar, and dairy foods (both of which were associated with poorer households and less educated mothers), especially at age one,” the Post explains. “Those same babies were found to be shorter on average, possibly, the researchers believe, because of a lack of foods that help promote proper bone growth.”

By the time the poorer children reached age six, those infant dietary options had turned into childhood eating habits, which can lead to a lifetime of issues.

“If you tend to offer healthy foods, even those with a somewhat bitter taste to infants, such as pureed vegetables, they will develop a liking for them. But if you always offer sweet or fatty foods, infants will develop a strong preference for them or even an addiction to them,” Wen said in a statement.

As startling as the discovery is, it shouldn’t come as a shock, particularly considering the way economy divides our food options across the country. Supermarkets in lower economic neighborhoods are glaringly absent, while fast food and corner markets are abundant and loaded with processed junk food. Baby diets are as dependent on access as adult diets, and these conditions promote a lack of awareness on the proper nutrition—both for the parents and their children. Beyond that, price is also a contributing factor, with processed foods high in sugar and fats more accessible and affordable.

“The gap between what the poor and rich feed their babies is an extension of a troubling and growing systemic problem in the United States,” the Post explains. “The tentacles of income inequality find their way into many different aspects of life, and food is a particularly apt example. Food inequality, whereby America’s wealthiest people eat well, while the country’s poorest eat, well, poorly, is not only real, but worsening.”

The key to breaking that cycle could lie in understanding that that gap begins to grow before a baby turns one year old and that poor feeding habits in early childhood tend to translate into poor eating habits later in life.

“Infancy is a critical period to learn various food tastes” said Wen. “Parents should take advantage of this period (when they have high control of what their infant can eat) to develop a life-long preference for healthier foods.”

Child with apple image via Shutterstock