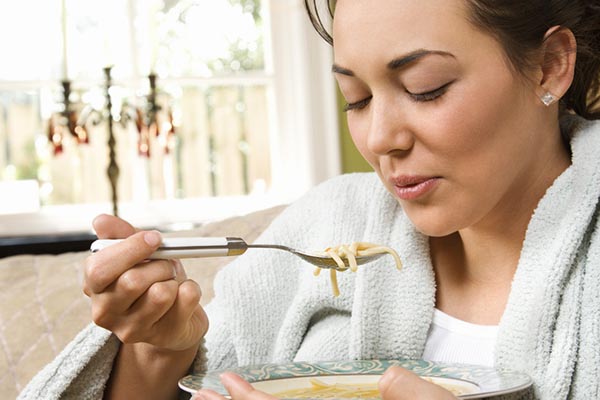 It’s likely that chicken soup has been touted as a therapy for respiratory illnesses because chicken contains cysteine, an amino acid that can break down mucus. And soup broth can help keep you from getting dehydrated if you’re also sick to your stomach. It turns out mom’s “cure-all” might actually make you sicker for a couple of reasons:

1. A full one-third of all packaged chicken contains salmonella or campylobacter bacteria. Not exactly what you want to be ingesting when your immune system is already compromised.

2. Chickens are fed sub-therapeutic doses of antibiotics as growth promoters on factory farms. The low doses of drugs don’t necessarily kill the bacteria, which helps it develop antibiotic resistance both in chickens and in the people who eat them.

PETA offers a wealth of healthy vegan recipes for get-well foods. And if your queasy stomach can’t handle solid food, opt for low-salt vegetable broth, which will keep you both nourished and hydrated.

The good news is that you can get cysteine – the flu-fighting compound in chicken soup – without the bacterial garnish! Opt instead for lots of red peppers, garlic, onions, broccoli, Brussels sprouts, oats, and wheat germ. Ever start eating a spicy dish and get a runny nose? That’s because peppers, garlic, and spices help break up sinus congestion. And many herbs and spices actually fight off bacteria, too.

Did mom also tell you to drink milk as a source of zinc to help boost your immune system? She was right about zinc, but milk probably won’t do your sinuses any favors.

Reportedly, milk can increase mucus production, especially in people who are allergic or sensitive to it, which is the last thing that people suffering from colds and the flu need. But peanuts, dark chocolate, wheat germ, and pumpkin and squash seeds can all give you zinc sans mucus. Sipping on clear, non-caffeinated, non-alcoholic beverages, such as herbal tea or warm water with lemon instead of moo juice will keep you hydrated and help flush out the invading organisms.

One thing mom was definitely right about? Eating your veggies! Fresh fruits and vegetables are filled with antioxidants and other disease-fighters. These things do just as much good now as they did when we were kids.