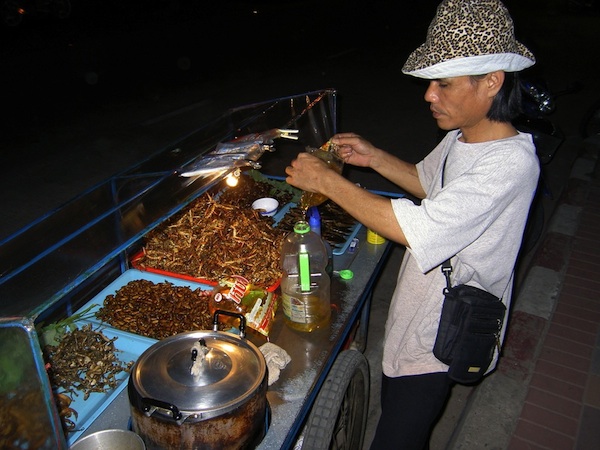 Old emails sleep in my “to blog” folder, awaiting a gentle shoulder shake and a reason to wake up and chat. This week, that nudge came from Jo Borrás at our sister site, Insteading, who wrote a review of The Eat-A-Bug Cookbook. Really. He did. I don’t think he really eats bugs, but it’s important to know how to prep them if you must survive on them one day. Thanks Jo.

In addition to entertaining me, Jo’s review reminded me of a mid-May email (which I had smartly moved to my “to blog” folder) from Grist. Apparently, the U.N. thinks we should eat bugs too. (Not sure why I saved this email. It’s not like I eat bugs.) But the United Nations’ Food and Agricultural Organization (FAO) just published a 187-page research report explaining the U.N.’s perspective.

After being inspired by Jo’s post and doing a bit of reading, I thought I’d share some revelations that might bug you. (I know.) Culinarily curious? Read on, and let us know if you’re in.

Would you do it?

The FAO’s report states very clearly: “Entomophagy is heavily influenced by cultural and religious practices, and insects are commonly consumed as a food source in many regions of the world. In most Western countries, however, people view entomophagy with disgust and associate eating insects with primitive behaviour.” I get that. But it’s interesting to consider this food alternative.

If you check out Jo’s cookbook review and “Sheesh! Kabob” recipe from The Eat-A-Bug Cookbook, you might have a second thought. Would you eat bugs to survive?

(“Waiter, there’s a fly in my soup” joke withheld despite my almost unquenchable drive to share it.)