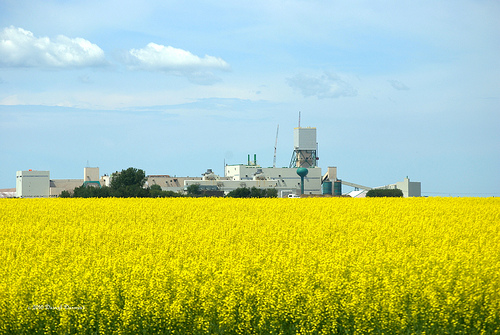 Recently, scientists have collected the first strong evidence found in the US of established GM canola in the wild.  The results will be presented today at the Ecological Society of America’s 95th Annual Meeting in Pittsburgh by researchers from the University of Arkansas, led by Meredith G. Schafer.

Learn about the findings and possible repercussions here.

The topic of genetically modified (GM) plants is a hot one.  GM plants are thought have the possibility to provide higher yields and a more stable food supply for our growing population.  However, research is conflicting to whether these statements are true, and generally shows that if there is an increase in yield, it is a modest one.  The threat to biodiversity is a major concern with GM plants.  GM plants are also seen as a threat to fair competition, since most GM seeds are patented.

Canola (or rapeseed) is a North American cash crop grown for the oil in its seeds.  A large percentage of the canola grown in North America is genetically modified to be tolerant to herbicide.  The idea is that farmers can spray their crops with herbicide to kill the weeds, but the canola withstands it and prospers, making farming simpler.

The results of the study

The scientists examined land along 5400 km roads in the North Dakota and tested a sampling of 406 canola plants.  Of the 406 plant collected, 347 of them tested positive for at least one the two proteins that make them tolerant to herbicides, which is a genetically modified trait.

Currently, GM canola is manufactured to have only one of the two proteins.  The proteins correspond to resistance to two different herbicides manufactured by different companies.  However, some plants in the study were found to have both of the proteins.  This is evidence that GM plants are reproducing and have established themselves outside of the agricultural setting.

Much like invasive species of insects or fish that are brought over by ship and end up decimating native populations by their sudden introduction into the wild, GM plants have the same potential.  They did not arise slowly and naturally out of the ecosystem to fill a niche, rather they bombard existing life with their herbicide-resistant super-powers, plus whatever unknown traits their modified genes carry.  If they have the capacity to cross-breed with other plants, they could become dominant.

If GM plants are prolific, a potential problem with this is that, in the US, roadsides are sprayed with herbicides to keep growth under control for road safety.  If there is herbicide resistant canola growing along the roads, the herbicides sprayed will be ineffective.  This could possibly lead to the development of stronger herbicides (probably more toxic ones) to manage the spreading GM plants – a sort of chemical/genetics arms race.  Given the strong correlation of pesticides and herbicides to diseases, this is something that should be avoided.

It is also possible that GM plants are not a huge threat to biodiversity.  They are highly domesticated and may not last in the wild.  Since roadsides are sprayed with pesticides, the GM canola has an advantage over non-GM canola there; however, in the real wild, there is no herbicide, and non-GM plants may have the advantage.

What will Monsanto do?  (WWMD?)

Monsanto is the corporation that produces one of the versions GM canola found in the study.  They generally have a reputation for dominating the food supply industry and have gone as far as suing individual farmers who unintentionally had GM canola turn up on their land for patent infringement.

Will Monsanto sue the US government for unlicensed GM seed along the roads?  or is this part of their plan, and will Monsanto have a new herbicide ready to sell for roadside canola superweeds?  Regardless, they will probably profit off of this finding.