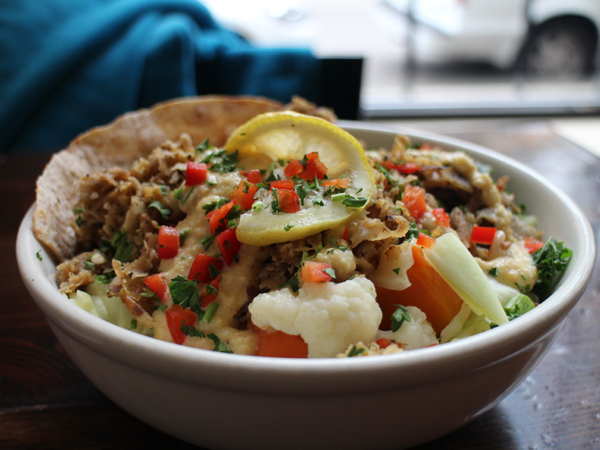 Vegan restaurant food might seem elusive, but it doesn’t have to be! Arm yourself with the right questions and requests and you can eat vegan pretty much anywhere.

When I first went vegan, finding vegan restaurant food seemed a little bit tricky. Between places putting bacon on everything and those pesky hidden animal ingredients, you couldn’t judge a dish by its description. Over time I’ve figured out how to get a vegan meal on my plate even at a steak house, but for new vegans this can still seem like a challenge.

Vegan superstar Cadry Nelson at our sister site Feelgood Style shared a comprehensive guide to ordering vegan restaurant food even at decidedly non-vegan places. If you’re planning to travel or just want to eat out without making your veganism an issue for your non-vegan friends, I highly recommend it.

How to Get Vegan Restaurant Food Anywhere

A common concern about going vegan is that it will be complicated to find places to eat. In a world littered with fast food restaurants on every corner, there aren’t nearly as many all-vegan restaurants. Does going vegan mean a lifetime of hummus sandwiches from home? Hardly! Even in small towns, you just have to know where to look and what to ask to find compassionate, animal-friendly options.

Most of the time I don’t ask servers, “Hey, do you have anything that’s vegan here?” Not everyone knows what that word means.  Some people don’t know the difference between vegetarian or vegan.  Some people mistake it for meaning gluten-free.  Instead, I peruse the menu and see what is already vegan or what looks like it could be made animal product-free with a few substitutions. When the server comes to the table and it’s my turn to order, I tell them that I don’t eat meat, eggs, or dairy.

Typically it’s easier to find and/or request plant-based meals in restaurants that serve Indian, Thai, Japanese, Ethiopian, Mediterranean, Middle Eastern, or Mexican food.  You just have to know how to ask.

Some chain restaurants have made it easier by being really upfront about their vegan options. Noodles & Company, California Pizza Kitchen, Sharkey’s, Jason’s Deli, P.F. Chang’s, Baja Fresh, and Chipotle are a few vegan-friendly chains that come to mind.  If you live in a city with an all-vegan chain like Native Foods, Veggie Grill, or Loving Hut, it’s even simpler!  (The above photo is of the Greek Gyro Bowl from Native Foods.  Highly recommended!)

A great tool for finding vegan restaurants is the Happy Cow website and iPhone app. Type in the city of your choice to see if they have any vegan or vegan-friendly restaurants, clothing stores, or grocery stores listed in that area.

Other good resources are Yelp (just search under the key word “vegan” in your city) and Google to see if any vegan bloggers have reviewed vegan options in your town. (Make sure that you put quotes around “vegan” or else Google will default to showing vegetarian options as well, which isn’t always as useful.)

Have a restaurant in mind? Check out their menu online and see if anything jumps out at you. If it doesn’t look particularly vegan-friendly, give the restaurant a call during a time that’s not busy and ask to speak with the manager or chef. Oftentimes restaurants are willing to help, especially with a bit of warning.

Finally, when you get to a restaurant, don’t be afraid to ask for what you want! Look over the menu and read all of the listed ingredients on each entree. Make note of which vegetables they have and create a hodgepodge meal of your own. The steak is served with a baked potato? The chicken tacos are topped with guacamole? The nachos come with black beans and salsa? Ask for a baked potato with black beans, salsa, and guacamole for a Mexican potato that is filling and flavorful.

A smile and friendly attitude goes a long way towards getting what you want. And remember, most restaurants want their customers to be happy. So don’t be shy!