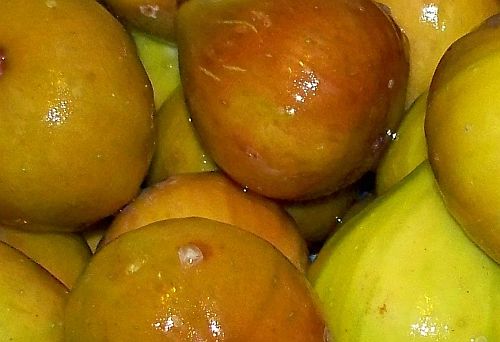 Figs are a delicious, nutritious fruit. A half-cup of fresh figs has about 80 calories and contains some of just about every vitamin and mineral the human body needs.

[social_buttons] The fig is one of the oldest cultivated plants, possibly even the first plant domesticated by humans. It has been found in archaeological digs around the Mediterranean with indications of cultivation dating back to around 11000 years ago. It was in the Garden of Eden when Adam and Eve used the leaves to make their clothes (don’t try this at home; fig leaves will give you a rash). The Buddha sat beneath a fig tree and had his revelations.

Over one million tons of figs are harvested each year worldwide. In the United States, California harvests about 14,000 tons of figs, making it the third largest producer in the world. Figs are found throughout the southern U. S. as a garden plant. Its popularity in earlier centuries makes it a common fixture of older homes.

Fig trees produce two or three crops a year, with harvest of each crop lasting several weeks. Our first crop of the year is ripening now, so I’m already considering how I’ll prepare them.

I like eating figs right off the tree. Fresh figs have a light, juicy sweetness that is lost in the dried version, but the fruit doesn’t last long once it’s been picked – maybe two or three days in the fridge. Dried figs can be found in most supermarkets year-round and are a good bet if you don’t have a tree in your yard.  Another alternative is to buy or make fig preserves.

For fresh figs, slice them in half and serve them as a side dish to accompany an egg or meat main dish. Another way I like to serve them is on a kabob. Cut the figs in half and skewer them with pineapple chunks, bell peppers, and mushroom halves, then set them over the grill.

They also go well as an hors d’oeuvre – cut the figs in half and wrap a thin slice of ham around them, securing the ham with a toothpick.

In a small bowl, mash the cream cheese. Add half the fig preserves, mash together until blended. Taste and add more fig preserves as wanted.

Fig preserves run the gamut from jam to whole fruit preserved in a simple syrup. If yours have whole fruit, you’ll need to chop the fruit into small pieces before incorporating the fig into the cream cheese.

Serve with crackers as a dip or spread on bread (dark, dense loaves go well with the fig and cream cheese dip).