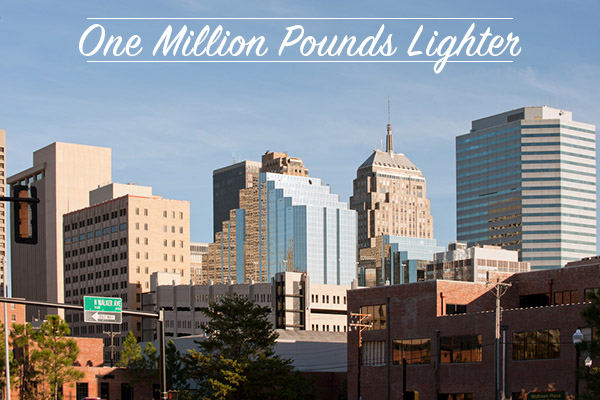 Oklahoma City was one of the most obese cities in the United States. Mayor Mick Cornett talks about how he helped his city with fighting obesity.

Oklahoma City, Oklahoma mayor Mick Cornett wanted his city to be happier and healthier, and he accomplished it by helping the residents there shed a collective one million pounds. In this inspiring, funny TED Talk, he walks us through fighting obesity on the city planning level.

Cornett’s story is a heartening case study in fighting obesity at the city level. The government can’t force us to eat better or exercise, but there are certainly changes that we can make in our cities to help fight obesity. The big change he made? Improving walkability. Cornett sums up the root of Oklahoma City’s obesity problem succinctly:

It might seem like a no-brainer, but more walkable cities have lower obesity rates. People who move more tend to weigh less. Making his city more walkable and encouraging people to walk made a huge difference in fighting obesity in Oklahoma City.

Cornett also launched a website to encourage residents to get moving and eat better. It was called This City is Going on a Diet. The site encourages residents to make healthier food choices and log their exercise miles. It was an incredibly successful tool that helps residents fighting obesity, and many people of Oklahoma City embraced it.

Oklahoma City is fighting obesity and supporting economic development at the same time. Walkability improves property value, and that’s not the only economic return on making your city more pedestrian-friendly. New projects in the city have health goals as well as economic ones. Their street car is a good example. Light rail improves accessibility to local businesses, and it encourages residents to walk instead of driving. Everybody wins.

Fighting obesity in the U.S. isn’t going to happen overnight, but the dramatic changes in Oklahoma City are definitely encouraging.