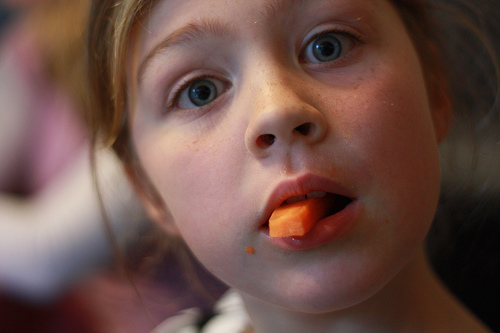 We know that childhood obesity is a serious health problem here in the U.S., but getting to the root of the issue is going to take some doing. Researchers at Michigan State University recently published a study (pdf) in the American Journal of Clinical Nutrition that looks at lower income families and how moms’ food habits affect their kids.

Why look at lower-income mothers?

Part of the problem is that healthy fruits and veggies are costlier than unhealthy fast food options. Low income neighborhoods are also more likely to also be food deserts – areas with limited easy access to fresh, healthy food.

The MSU study found that if lower-income mothers want kids with healthy diets, it’s best to adopt healthy eating habits themselves and encourage their children to eat good foods rather than use force, rewards or punishments. The mothers who led by example and persuaded, rather than ordered, their kids to eat their vegetables had kids with healthier diets, said Sharon Hoerr, MSU professor of food science and human nutrition:

Mothers should stop forcing or restricting their kids’ eating. They’d be better off providing a healthy food environment, adopting balanced eating habits themselves and covertly controlling their children’s diet quality by not bringing less healthy foods into the house.

It makes sense, right? Keeping junk food out of the house and teaching healthy eating as a habit, not as a punishment, helps kids pick up a healthy food routine. When you overtly restrict junk food but are still eating it yourself, you make it more tempting. The forbidden Pop Tart.

The study also suggests that regular meal and snack times and serving up smaller portions of healthy foods can help curb childhood obesity. They also addressed the issue of “picky eaters.” Hoerr said:

With picky eaters, it’s best to coax and encourage them to eat rather than yell at them. Other ways to get them interested in having a balanced diet is to take them to the grocery store or garden, and help them select new foods to taste as well as allow them to help cook at home.

The next step, Hoerr says, is to develop home-based and interactive educational materials for parents who want to encourage healthful eating.

What this study doesn’t address – and you can’t expect any one study to hit every aspect of the obesity problem – is that lower-income areas don’t always have access to healthy food, and even when they do often those foods are too expensive for families who are struggling to put meals on the table. Now that we know that parenting by example helps kids form healthy eating habits, how do we help those mothers put that healthy food on the table?