This billboard about how to fight drought with diet appeared in my neighborhood and brightened my day! If you care about the planet, it’s time to take a hard look at what’s on your plate. 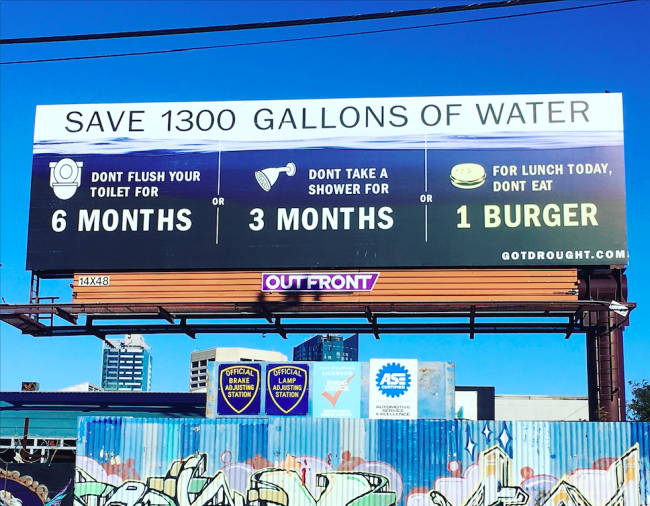 This billboard – which I saw on my bike commute in San Francisco – is a public art project and social media campaign by Los Angeles-based artists Karen Fiorito and Alex Arinsberg, focused on raising people’s awareness about how much water it takes to produce meat and dairy as opposed to a plant-based diet – with the hope that they would ‘shock’ some residents into thinking differently about their diets. The billboards were seen around LA in late 2015, and arrived in San Francisco in late 2016 (I’m a bit late writing this post!).

The idea that meat is so directly related to drought is not news to me or others in the vegan food scene, but it’s still (I would suggest) a rather new and/or challenging concept for others to accept.

I feel like this argument was never more clear than in the debate that raged about two years ago about almonds: almost overnight, it seems that almonds went from being everyone’s favorite superfood to the scapegoat for the water issues facing California. News channels dramatically covered the zillions (approximately) of gallons of water almonds use during all their growing stages, and derided the new acceptance of almond milk as a dairy alternative. Slate referred to it as ‘almond-shaming.’ But you know what these commentators did not cover? The fact that animal agriculture uses even more water than almonds.

If you’re serious about trying to fight drought with diet, you should be eating less (or no!) meat, not shaming poor, defenseless almonds.

Last year, when this debate was raging, California was the middle of a long drought – 10-15 years depending on who is estimating. Aquifers across the state were running low, straining the groundwater needed for the huge population and growing all the food for the state and for domestic and international sale.

Animal agriculture is really just the worst for the planet – this is now a mainstream discussion. And this is especially important when it comes to water issues. In the same Slate article, Eric Holthaus writes that, “Almonds are much more efficient water-users, per calorie, than dairy or beef,” and that “Replacing a glass of cow’s milk with almond milk is a net gain for the environment.” This doesn’t mean that almonds have zero environmental impact: I was shocked to see the amount of flooded orchards when I drove through the central part of the state.

It was an extra rainy winter and spring, especially in Northern California, which help alleviate some of the worst issues. But as reported in a new study, movement towards a more plant-based diet is a big issue when it comes to saving our productive farmland. Though this study focused more on land-based environment issues, their points are salient and are connected to water concerns in that improvement in efficiency will help improve runoff, manure issues, and general ecosystem health.

In the study, Michael Clark and David Tillman write,

“[For] all environmental indicators and nutritional units examined, plant-based foods have the lowest environmental impacts; eggs, dairy, pork, poultry, non-trawling fisheries, and non-recirculating aquaculture have intermediate impacts; and ruminant meat has impacts ~100 times those of plant-based foods. Our analyses show that dietary shifts towards low-impact foods and increases in agricultural input use efficiency would offer larger environmental benefits than would switches from conventional agricultural systems to alternatives such as organic agriculture or grass-fed beef.”

WaterFootprint shares stats on how much water some common agricultural products (including animal food), and of course, the biggest water users are meat and animal products, followed by nuts. 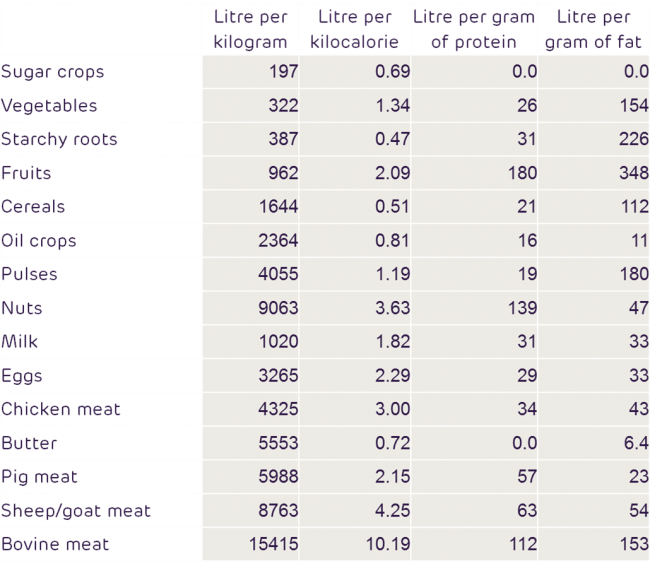 To me this returns us to the adage that you can’t be a meat-eating environmentalist. I know this is a controversial statement (and I have tons of friends that eat meat and are ardent climate change activists), but once you start digging into the facts of water issues, runoff, rainforest clearing, antibiotic use and increasing human antibiotic resistance… all these things up and it becomes so abundantly clear that a meat-focused diet it truly a path to a a less healthy future for us all.

1 thought on “Fight Drought with Diet – What’s the Water Footprint of your Food?”