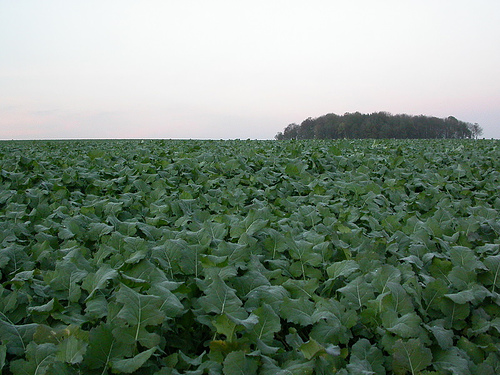 The USDA approved the Roundup Ready sugar beets in 2005 as not having any significant environmental effects. However, U.S. District Judge Jeffrey White said this does not take into account cross-contamination from the fields of GM beets to those growing non-GM beets or Swiss chard (which, it turns out, is a beet variety! Who knew?).

According to the Organic Consumers Association:

Sugar beets produce 30 percent of the world’s sugar and, according to consumer groups, half the granulated sugar in the United States. This year’s planting, centered in Oregon’s Willamette Valley, is the first to include a full crop of the Monsanto product.

Apparently, when the USDA made their decision in 2005, they gave a nod to cross-contamination but said this did not matter, because farmers were still free to buy non-GM seeds. Still we’ve seen how much freedom Monsanto has allowed farmers in the past. How long before the first conventional beet farmer gets hit with a lawsuit from Monsanto for GM beets resulting from cross-contamination found in his fields?

So what do you guys think? Could this ruling change the way the USDA goes about approving new GM crops in this country?