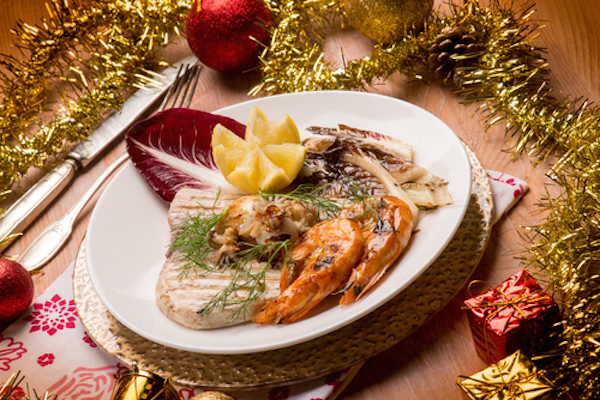 I’ve heard of the Italian Christmas tradition, the Feast of the Seven Fishes for… well, forever. But I didn’t know much about it — which is peculiar because I love all things Italian. Especially the food. So to close the gaps in my knowledge and possibly inspire you to get your seafood groove on this holiday season, I did some research.

Looking for a New Holiday Tradition?

The Feast of the Seven Fishes is a tradition started in Southern Italy and now commonly celebrated by Italian-Americans. On Christmas Eve, instead of overindulging in rich, heavy foods, families gather to celebrate with seven seafood dishes. Or nine, eleven, twelve, or thirteen, depending on what Italian region the families hail from. The tradition is based on the Roman Catholic practice of abstaining from meat (and sometimes dairy) on Christmas Eve as families await Jesus’ birth.

Why seven? Opinions differ. My research uncovered that the number seven may refer to any (or many?) of the following:

I’m no religious scholar, so I don’t know what the number seven actually represents. I do know that — whatever it means — seafood is on the menu. And I love seafood!

The Feast of the Seven Fishes Menu

For the Feast of the Seven Fishes, families serve a variety of seafood dishes, commonly including baccalà — or dried salt cod — shrimp, clams, mussels, and big fish, like tuna, or salmon. Pasta is usually on the menu as an accompaniment to the fishy feast. Anthony Parente, writer and first-generation Italian-American shares recipes for the seven dishes his family traditionally made on his website ItaliansRUs.com. His family served baccalà, baked shrimp, fried calamari, pasta with anchovies, pesce a la padella, sandy eels, and steak fish.

Thanks, Anthony, for sharing your heritage with us.

Religious references aside, I love discovering cultural, culinary traditions, like the Feast of the Seven Fishes. If you celebrate it, won’t you please share your experiences with our readers? If you don’t, will you consider adding it to your holiday plans? (To keep your menu sustainable, find the best seafood to serve using Monterey Bay Aquarium’s mobile app, Seafood Watch.)