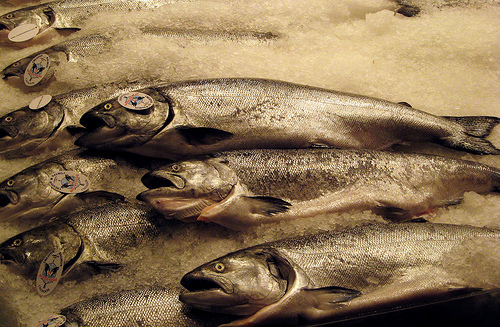 When the FDA held hearings on AquaBounty’s AquAdvantage GMO salmon earlier this year, they neglected to include a statement by other federal agencies indicating that raising the GMO salmon in open-ocean pens would violate the U.S. Endangered Species Act.

The U.S. Fish and Wildlife Service and the National Oceanic and Atmospheric Administration wrote a Federal Biological Opinion on AquaBounty’s AquAdvantage GMO salmon and submitted it to the FDA for consideration before the hearings. A Federal Biological Opinion is a document required by the Endangered Species Act that explains how a proposed activity would affect endangered species. It also includes recommendations on how a proposed activity could be done

The document explicitly stated that it would be illegal to raise GMO salmon in open-water pens. (Page 29, section 2, pdf file). Arguably, section 1 (p28) of the same document prohibits the AquAdvantage salmon from being raised in Atlantic waters since some of its introduced genes are from a Pacific fish, the Chinook salmon. (The ocean pout, the other fish whose genes were introduced into the AquAdvantage salmon, is a North Atlantic fish.)

If the AquAdvantage salmon is approved, current plans are to breed it in Canada and raise it in Panama.

The FDA did not distribute the document to the panelists at the hearings, despite the clear bearing the Federal Biological Opinion has on the AquaBounty case.

The GMO salmon under question grows faster than wild salmon. Fish escape from open-water pens regularly, so at least some AquAdvantage salmon would roam free right from the start. While the fish are engineered to be sterile, up to 5% of them are not sterile and could breed with wild non-GMO salmon stocks. Their offspring would have significant competition advantages and could quickly outbreed and outcompete the wild stock, sending an endangered species that people rely on for food into extinction.

Let your senators and representatives know what you think of the AquAdvantage GMO salmon.

Credo has a web page that makes it easy to submit your public comment.

Go to the regulations.gov site and submit your comment on requirements for labeling the GMO salmon if it is approved. Currently, there are no requirements to label any GM foods.

(If anyone can find the public comments page for the approval of AquAdvantage and post it here, I’d appreciate that.)