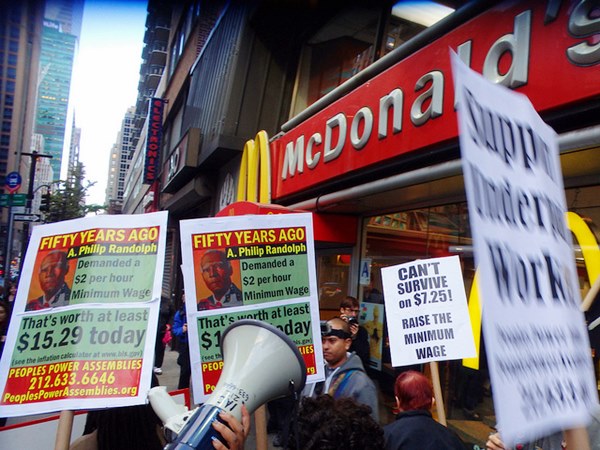 Fast food workers across the U.S. strike for a livable minimum wage, and for the right to unionize. Industry threatens robots, disaster, and utter economic collapse if it’s forced to pay food workers enough to buy food.

Whether or not you would ever in a million years patronize fast food restaurants, this conflict highlights the need to examine and revise laws allowing unlimited exploitation of workers by food industry giants. As such it’s long past due, and worth close watching.

Starting yesterday, thousands of workers in over a hundred U.S. cities walked out of low-wage jobs to protest unlivable wages. Fast food workers comprise a large segment of protesters, joined by low-wage workers from retail or other domains. Protesters want a minimum wage that’s also a livable wage for full time workers, which in today’s economy means about $15 per hour. They also want the right to organize for the purpose of collective bargaining, without employer retaliation.

The New York times called Thursday’s strikes ‘the biggest wave of job actions in the history of America’s fast-food industry.’

The nationwide walkouts come as momentum appears to be gathering for action on increasing the federal minimum wage. On Wednesday, President Barack Obama gave a landmark speech on income equality, which he said was “the defining challenge of our time”, while in November thousands of Walmart workers walked off the job in the latest of a series of protests against low pay and poor conditions.

According to Fast Food Forward, the fast food industry grosses (pun intended!) about $200 billion annually; average annual income for a full-time NYC fast food worker is about $11,000 — roughly one quarter of what’s needed to provide basic food, shelter, and clothing to that worker for one year.

The fast food workers’ strikes come right on the heels of McDonald’s media oopsie, in which they drew well-deserved public ire for encouraging underpaid workers to just apply for food stamps.

As ridiculous as that sounds, it’s not uncommon in the current fast food landscape. Read Fast Food Poverty Wages- The Public Cost of Low Wage Jobs in the Fast Food Industry for a sobering look at the social impact of an unreasonably low minimum wage. Here’s the broad-stroke summary, via Fast Food Forward:

Predictably, industry profiteers are outraged that their workers want to be treated as human beings rather than simply cogs in the megamillion-dollar corporate machine.

For a quick bite of satire published today in The New Yorker, check out Fast-Food Industry Rejects Workers’ Demand to Be Considered Human. Like all good satire, it’s philosophically if not factually accurate.

The fast food industry argues that increasing the minimum wage will do all kinds of heinous things, like make them SLASH JOBS!!! And USE ROBOTS INSTEAD!!! And RAISE PRICES!!! And all kinds of hyperbolic disaster shall then, according to industry reps, befall our beleaguered economy.

From a CNBC article titled Debating the effects of a $15 fast food wage:

‘With the industry estimating that one-third of its costs go to labor, [Arindrajit Dube, an economics professor] said a $15 wage would mean wage increases averaging around 60 percent, raising the cost of a $3 hamburger to $3.50 or $3.60.’

Reality check: if fast food companies slash jobs, it will be because they choose to do so rather than compromise teeny percentages of their profit margins. It’s a multibillion-dollar industry; they’ll turn pretty profits regardless of fair worker wages. If they choose to cut jobs they’ll take money from their customers and see a resultant sales decline, since fast food customers are disproportionately represented among poor and working-class communities.

If they move towards robotics, that will require heavy investment — the technology just isn’t there yet — and it will also require NEW and HIGHER PAYING jobs to maintain those hypothetical worker-replacing robots.

If industry is forced to raise prices to pay fair wages, there’s a chance people will eat less fast food; given the problems it’s causing, that wouldn’t be such a horrible development! But it might not even mean that: workers who earn a living wage have more money to spend on things like fast food.

However you eat — whether or not you support fast food purveyors — it matters in a huge way whether our society does or doesn’t tolerate corporate exploitation of food industry workers. History teaches the observant student that megabillionaire corporations will never ever ever act in socially responsible ways without extreme public pressure. As conscious eaters, let’s provide it!

If you stand with fast food workers, and other low-wage workers who deserve a living wage, set a google news alert for ‘fast food protest’ — there will likely be more actions forthcoming for you to join.

If you still eat fast food, stop: tell management of your former-drive-thru-habit you’ll stay away until workers at that establishment earn a livable wage.

Since (as always!) knowledge is power, read all you can about this issue — and share what you find on all your social networks. It matters, good people!

‘Let the workers organize. Let the toilers assemble. Let their crystallized voice proclaim their injustices and demand their privileges. Let all thoughtful citizens sustain them, for the future of Labor is the future of America.’ — John L. Lewis