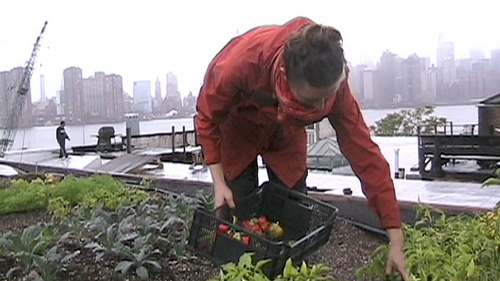 As people move from rural to urban settings in search of economic opportunities, urban agriculture is becoming an important provider of both food and employment, according to researchers with the Worldwatch Institute:

“Urban agriculture is providing food, jobs, and hope in Nairobi, Kampala, Dakar, and other cities across sub-Saharan Africa,” said Danielle Nierenberg, co-director of the Institute’s Nourishing the Planet project. “In some cases, urban farmers are providing important inputs, such as seed, to rural farmers, dispelling the myth that urban agriculture helps feed the poor and hungry only in cities.”

The United Nations projects that up to 65 percent of the world’s population will live in cities by 2050, up from around 50 percent today. The rate of urban migration is particularly high in sub-Saharan Africa and South Asia, where inadequate urban infrastructure struggles to keep up with the large influx of people. “Although most of the world’s poor and hungry remain in rural areas, hunger is migrating with people into urban areas,” said Brian Halweil, co-director of the Nourishing the Planet project.

Currently, an estimated 800 million people worldwide are engaged in urban agriculture, producing 15–20 percent of the world’s food. However, this activity occurs mainly in Asia, making it critical to place more worldwide emphasis on this vital sector. In Africa, 14 million people migrate from rural to urban areas each year, and studies suggest that an estimated 35–40 million Africans living in cities will need to depend on urban agriculture to meet their food requirements in the future.

“Urban agriculture is an important aspect of the development movement as it has the potential to address some of our most pressing challenges, including food insecurity, income generation, waste disposal, gender inequality, and urban insecurity“ said Nancy Karanja, a Professor at the University of Nairobi, Kenya, and a State of the World 2011 contributing author.

Organizations such as Urban Harvest and others are working across the African continent to enhance urban agricultural efforts. In sub-Saharan Africa, the Educational Concerns for Hunger Organization (ECHO), a Florida-based organization, has helped farmers build gardens using old tires and other “trash” to create plant beds. And the group Harvest of Hope has helped organize urban Community Supported Agriculture (CSA) programs in Cape Town, South Africa, purchasing excess produce from city gardens and redistributing it in schools in the area.

These projects are not only helping to provide fresh sources of food for city dwellers, but also providing a source of income, a tool to empower women, and a means of protecting the environment, among other benefits.

According to Nourishing the Planet, urban agriculture provides three important advantages that are evident in successful projects across the African continent:

Close to home (and market)

Produce from urban farms and gardens does not need to travel as far as produce grown in rural areas to reach the dining table, which helps to reduce production costs, post-harvest waste, and greenhouse gas emissions. This is also helpful in situations when supply chains from rural areas have been interrupted and cities are unable to receive food imports.

In Kibera, the largest slum in Nairobi, Kenya, Urban Harvest has helped women build “vertical farms” simply by using sacks of soil in which to grow vegetables. Using these gardening activities, the women share business ideas and technical know-how, empowering each other. The community gardens also act as a forum where community members can exchange ideas and discuss community issues and problems.

Faced with limited resources, urban farmers are adept at utilizing urban waste streams to strengthen their soil and grow their crops. Garbage is used as compost or fodder for livestock, and nutrient-rich waste water is used for irrigation. By re-using these waste products, urban farms help to reduce the amount of refuse clogging landfills as well as the amount of water used in cities. Community gardens also provide an aesthetically pleasing space and help improve the air quality in urban areas.

To purchase State of the World 2011: Innovations that Nourish the Planet please click HERE. And to watch the one minute book trailer, click HERE.