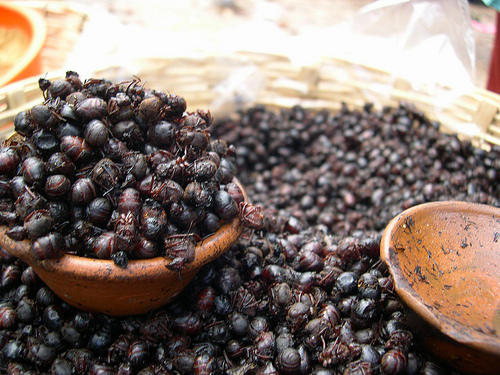 If there existed a local food that was high in protein, calcium and other vitamins, that would help reduce greenhouse gases from agriculture, and was available in thousands of different flavors, it would seem too good to be true…and it is, because the food that fits this bill is bugs.

The United Nations has been on a search for meat alternatives since recommending cutting back on meat as a way to reduce global warming.  A policy paper on bug farming as an alternative, which was authored by entomologist and insect-eating enthusiast Professor Arnold van Huis, is being formally considered by the UN.

Insects make up a large chunk of the world’s animal biomass, so it makes sense to consider eating them.  Because insects are cold-blooded, they are metabolically extremely efficient.  They don’t convert food energy into heat energy, unlike cows or pigs, for example.  In short, compared to mammals, they need less food to grow big enough to feed us, which makes them a more sustainable food source in terms of resources used and greenhouse gas emitted.

Getting people to eat bugs sounds great in theory, but are they delicious?  Probably not yet according a majority of western taste buds.  For us weak-stomached westerners, van Huis suggests that a good starting point would be bugs ground-up and made into a patty, basically so no one knows they are eating bugs – yum, cockroach burger.  Eventually, this could go mainstream – van Huis likens eating bugs to eating shrimp.  It could even help reduce obesity – instead of buying potato chips, get a bag of healthy baked crunchy crickets.

Bugs are eaten all over the world, particularly in the East.  That means that some people find them tasty.  If they really could produce less than one-tenth of the greenhouse gases that mammal meat produces, perhaps from the UN’s point of view, it is worth a shot.

But why not just go vegetarian?

Maybe I shouldn’t be so skeptical, but I don’t know many people that would eat bugs, and I know that I certainly won’t.  I eat a plant-based diet, and I’m healthy from it, so why would I let a bug be the middle man between me and my delicious plants?  It seems less efficient (and less appetizing) than me just directly eating the plant.

The other claim I don’t understand is that the UN paper suggests before getting westerners to eat bugs directly, a better way may be to feed bugs to the food that westerners already eat, since animals like chickens and fish naturally eat insects.  How is this more efficient than just feeding chickens plants?  Food would have to be grown for bugs to eat too.  It just seems that insects would again be the middle man.

Do westerners really love meat so much that if they couldn’t get a steak, they would opt for a bug patty?  I don’t think so.  Since meat isn’t necessary in the quantities that it is eaten in the western world, the “meat crisis” really only exists as long people are convinced that they need to eat 2-3 servings of meat per day.  I’d bet most westerners would go vegetarian before eating 2-3 servings of bugs, in patty form or not.

But again, maybe it’s just a mental thing for me.  They could be delicious and we westerners could be missing out.

Would you eat bugs?

Do you think eating bugs is a viable solution to the problems we face with food?  Would you try eating bugs?  Have you tried eating bugs?  Would you rather eat bugs as meat than eat a vegetarian diet if mammal meat were no longer available?