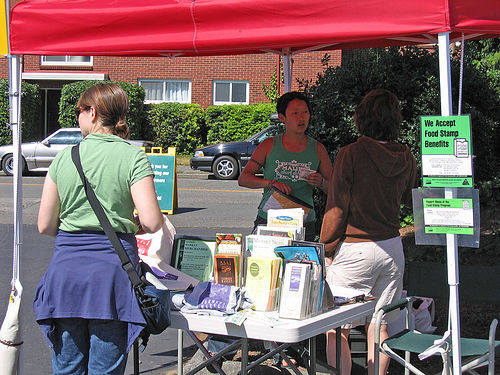 Did you know that many farmers markets take food stamps?

Many of the markets here in the Atlanta area have been taking food stamps for years, and it looks like markets other cities are doing the same. The photo above is from the West Seattle Farmers Market, which also accepts food stamps.

Benefits for Customers and Farmers

We’ve seen that less access to fresh food contributes to higher obesity rates, and it’s poorer consumers that tend to lack this access. Not only do farmers markets add an option for fresh, often organic local produce, the prices are often very competitive. Folks can stretch those food dollars while stocking up on healthy eats for themselves and their families.

Times are tough, and farmers markets aren’t immune to the effects of the economic downturn. By taking food stamps, they’re able to broaden their customer base, which hopefully translates to better sales for the farmers.

Do any local farmers markets by you accept food stamps? I’d love to get a list going in the comments!