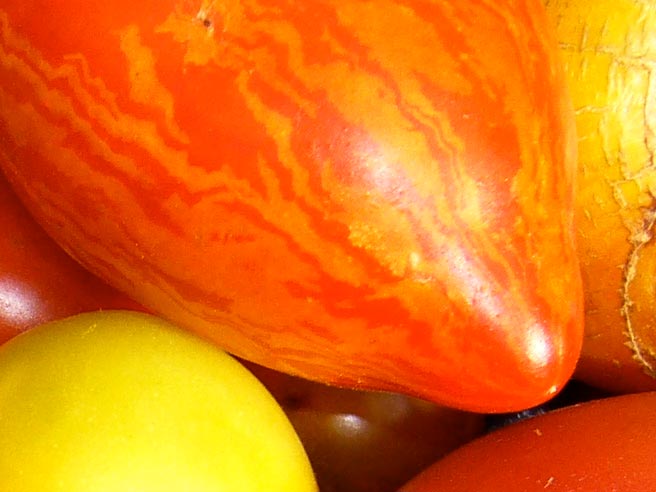 As August turns to September, the seasons’ bounty becomes a mixed blessing of both summer and fall. The last of the sweet corn is sold alongside the first few small butternut squash. It’s time to relish the last of the beautiful heirloom tomatoes. The final week of berries, a longer lasting crop this year by the blessing of a milder summer. Eggplants and peppers fill the tables. And the zucchini, more than I could possibly ever cook, the zucchini. This has to be the most remarkable of times, this point where summer still bears fruit and autumn harvest begins as well.

Here is a recipe that celebrates the last of summer’s bounty, all in one dish. The okra is a Cajun addition, giving the dish a twist on the classic French version of Ratatouille.

Recipe and links after the jump.

Salt eggplant and set aside while you do the rest of the chopping. Heat oil in large dutch oven (oven-proof). Sweat the onion and garlic (lower heat than saute, no browning). Add the peppers and continue to sweat the vegetables. Add okra. Give this mix about ten minutes of time on the stove and stirring occasionally. Add tomatoes and smash a bit with the spoon. Rinse the eggplant and drain excess water. Add to pot.

Add the squashes, red wine vinegar, sugar, and red pepper flakes. Stir a bit and then place the pot, uncovered, into the oven for 30-40 minutes. Stir once during roasting time. Remove from oven and season to taste with the black pepper and any additional salt you need.

Links for this week:

Barnabas Hawkins presents “A Visually Proven Method for Brewing Your Own Great Tasting Beer.” posted at Homemade Beer Recipes that even a Caveman can Follow. Also, in time for Oktoberfest, Wine Making At Home – Buy Now ! posted at Make Homemade Wine like a Seasoned Veteran.