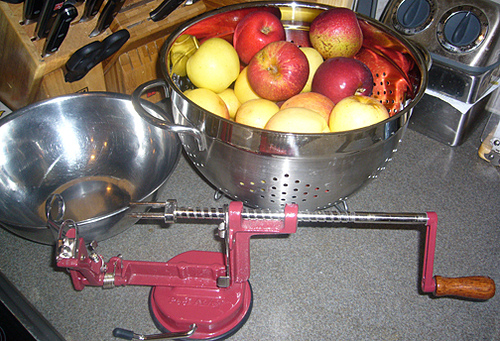 It’s fall. The telltale signs have been arriving for a couple weeks now — pumpkins among the watermelons at the farmers market; the winter squashes alongside the zucchini; dwindling tomatoes; arrival of cole crops for a brief second season of greens, mostly kale and chard and heartier greens. Summer’s berries are gone, peaches are fading and the first of the apples and pears arrived.

With the temperature dropping outdoors and a crisp chill in the air, I am contemplating fall soups and a few other seasonal favorites like homemade applesauce.

I didn’t make homemade applesauce very often until last fall when I stumbled upon a rather medieval-looking gadget. My spouse just rolled his eyes, “Where are we going to put THAT?”

My child, who is growing up in our high-tech times, eyed it suspiciously. “What happens when it runs out of batteries?” she asked.

But once we saw how fast this thing peels, cores and slices apples, I have to fight both of them for a turn at the crank. Applesauce, and pie filling, are now just a 15-minute effort. No batteries (or cords) required.

Combine the apples, cider, cinnamon stick, and star anise if using, and lemon juice in a large Dutch oven. Bring to a boil then reduce heat to medium. Cover the pot and simmer for 25 minutes until the apples are tender.

Remove star anise and cinnamon stick. Mash to desired consistency with potato masher, then simmer uncovered for another 10-15 minutes until the mixture is the desired thickness.

Remove from heat and mix in sugar and spices. Adjust tartness with additional lemon juice if desired.