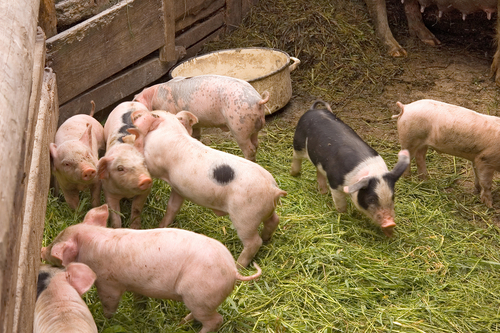 From happy cows to ecstatic chickens, animals are often anthropomorphized in television spots, on billboards or emblazoned on egg and milk cartons in order to get us to buy the products gleaned from them. If we’re to believe the marketing, the creatures we choose for our hamburgers, ribs and buffalo wings are sure excited at the prospect of providing our dinners, even downright giddy in some cases. (Remember the fast food chain’s ad in which a rooster’s greatest aspiration was, apparently, to be sliced into strips, dunked in a deep fryer and served like french fries?)

The point of all of these smiling, talking critters—aside from selling products of course, is to distract us from the fact that animals today don’t live anything close to the pastoral paradise presented on TV. If most people knew the truth, or acknowledged it anyway, they would swear off meat immediately. At least that’s what I did.

Growing up on a small farm taught me a thing or two about meat. The cattle, pigs and chickens on my family’s farm really did enjoy lives close to the ones featured in today’s slick advertising. Right up until my dad’s axe came down on the chicken’s scrawny necks or the butcher drove up and put a bullet between Bessie’s eyes.

As a child, I’d be scruffing Porky behind his soft ears one week and enjoying crispy bacon from his backside the next. Such was the way of farm life. Though it wasn’t exactly heaven on earth for a heifer back on the family farm, it was a far better existence than the vast majority of animals experience in the interest of modern commerce. But I didn’t know any of that until later. As difficult as it was to see my pets turned into protein, the farm wasn’t where my vegetarianism began. I became a vegetarian because I got fat.

Discovering the Truth about Factory Farms

As an athlete in high school I didn’t have to worry much about what those double cheeseburgers were doing to me, much less where they came from. Adolescence and exercise kept my metabolism humming along and it wasn’t until a sedentary lifestyle and abundance of cheap food coalesced sometime in my early twenties to turn me into something reminiscent of the Michelin Man that I began to take a good, hard look at my diet. Then I took action in one of the few ways I knew how: I picked up a book. That book was Diet for a New America by John Robbins.

Three things happened to me in the immediate aftermath of reading Diet for a New America:

For me, Diet for a New America was Upton Sinclair’s The Jungle, updated and non-fictionalized for a new era.

“The meat business,” said Robbins in the book, “depends on our repressing the unpleasant awareness that we are devouring dead bodies.”

In order to keep producing the ever-cheaper food consumers demand for an ever-burgeoning population, factory farmers push the boundaries of cruelty in the name of efficiency. Today, animals are subjected to unnaturally crowded conditions which results in frequent outbreaks of disease. The diseases are, in turn, treated with massive doses of antibiotics which eventually end up in our food supply.

It’s a vicious circle of life and death that we’re largely shielded from by pretty packaging and colorful advertising. You’d never know it, but most of the animal products Americans consume, including eggs and dairy products, come from creatures that spend most of their miserable (and mercifully short) lives on mountains of their own feces. Of course that inconvenient fact is left out of upbeat merchandising materials. Since most of us will never step foot on a factory farm, from the industry’s perspective, the less we know the better. Needless to say, the animals, if they really could speak their minds like in the commercials, would have a slightly different take.

As Robbins reminded us nearly a quarter of a century ago, “The real cause of hunger is a scarcity of justice, not a scarcity of food.” More than 60 percent of the grains we grow in the US become feed for cattle. “Enough grain is squandered every day in raising American livestock for meat to provide every human being on earth with two loaves of bread,” says Robbins.

Since Diet came out in the late 1980s, the strain on the environment has become even more pronounced. Meat production is now responsible for more greenhouse gases than every single car, truck, bus and airplane on the planet combined. In addition, rain forests around the globe are disappearing at an alarming rate while, at the same time, water supplies are being both squandered and polluted to sustain a system that is ultimately unsustainable. All so folks like you and I can enjoy artificially cheap meat.

Confessions of a Modern Hypocrite

In my own experience, heavy-handed imagery and self-important screeds like this one often cause me to avert my gaze or turn the page. But the truth we all learned in kindergarten is still the truth: you are what you eat. We can ignore it for a while, and I often do. As far as knowing where our food really comes from, most people are, decidedly, blissfully ignorant. And who can blame them? For their part, the meat, egg and dairy industries, through the use of reassuring images that harken back to a bygone time, are determined to keep it that way. But the fact is we eat cruelty in a thousand products.

Am I superior to my carnivorous brethren? Hardly. Nearly two decades after first reading his book, I have either forgotten or willfully ignored many of Robbins’ words, most of which are even more true now than they were back then. I still wear leather in the name of vanity and have given up veganism for little more than its inconvenience. Although I still eschew meat, I started eating eggs at some point in the intervening years, and I am now loathe to sacrifice the occasional skinny latte in the name of sanity.

Still, I try to be conscious of my choices, to keep my hypocrisy to a minimum. Like most of us, I attempt to do the best I can with the information I have. In writing about my journey to vegetarianism, though, perhaps I’ve gained a little perspective that only time and distance can provide. The decades and miles from my young life on the farm. It’s reminded me why I went vegan in the first place. I guess that’s a start.

Michael Kerr is an award-winning freelance writer living in Portland, Oregon. His work has appeared in numerous books, magazines and newspapers including Portland Business Journal, USA Today and Hive Health Media. He writes about nutrition and fitness for Healthline and other websites.