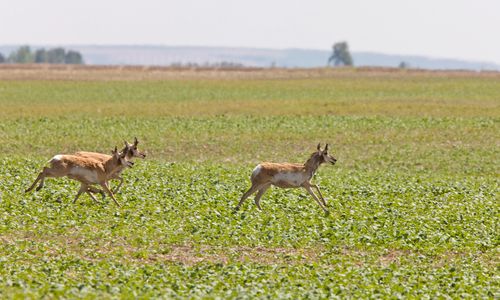 The Farm Bill is set to expire in September, so efforts are under way to complete the 2012 Farm Bill. The Senate will vote on the bill soon, but it’s not too late to let your Senators know what you think of the bill.

The title of the bill is the Agriculture Reform, Food, and Jobs Act of 2012. It’s an astonishing 980 pages long and covers a wide range of topics such as agriculture loans, subsidies, and crop insurance; conservation of wetlands, grasslands, and wildlife areas; food assistance; and research, among other things. It cuts $23 billion from the budget over the next ten years

The bill ends direct payments to farmers. This is good news since direct payments went almost entirely to large corporations and absentee landowners. Direct payments were originally meant to keep small farms from going under in hard times, but the program hasn’t worked that way in a long time.

Crop insurance is being scaled back. Right now, the government pays a portion of the premium for crop insurance. Again, subsidizing premiums is meant to keep small farms from going under in hard times, but large corporate farms are subsidized the same amount. Spending caps have been proposed, although dollar amounts didn’t make it into the bill.

Much of the Farm Bill is focused on food assistance, either directly or indirectly. Food stamps (Supplemental Nutrition Assistance Program) will be reduced, with an average of $90 less monthly benefit per household. The current average benefit is $287 per month. This would amount to a nearly 25% reduction in grocery money for about 49 million Americans.

A new program called Sodsaver limits crop insurance on new croplands for the first four years of tillage. The aim is to discourage farmers from destroying native prairies.

Accounting procedures are changing for some conservation programs. Rather than conserving acreage, the programs will be based on dollar amounts. This is supposed to give administrators flexibility to address more critical habitat.

At 980 pages, the 2012 Farm Bill has a lot in it. The Senate committee kept the contents a secret until they were nearly ready to send it to the Senate floor. There’s still a lot to dig through and I’ll be writing more about it as things progress.

You can contact your Senators to let them know what you like and dislike about the bill.

To read the full 980-page Farm Bill, go to the Agriculture Committee’s site and click on “Manager’s Amendment to the Committee Print”.  That’s the version that will be presented to the Senate.

Pronghorn antelope on the prairie via Shutterstock