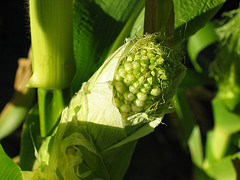 On the table in the European Union yesterday was the question of MON 810 Maize, a genetically-modified type of of corn.  Developed by the United States-based Monsato Company, MON 810 releases an insecticide intended to kill European corn borer larvae before the pests can harm the plant.  Although the engineered corn is currently approved for cultivation in the European Union, individual member-states within the EU have the authority to enact bans against growing GM crops.

Hungary, Austria, Greece and France have already made a stand against MON 810 by completely banning its cultivation within their borders.  But yesterday, the European Commission attempted to reverse Hungary and Austria’s ban.

This is not the first time the commission has challenged a country’s right to prohibit genetically engineered crops.  The European Commission has tried three times previously with Austria and once before in Hungary, but each time the overturn attempts were staunchly opposed by a solid majority of votes.  Monday’s vote was no different — twenty-one of twenty-seven member-states voted to reject the commission’s proposal and uphold Hungary and Austria’s right to ban the modified corn.  This follows in the footsteps of last month’s vote which similarly upheld the right of France and Greece to keep MON 810 off their countryside.

While this marks a victory, the fight to preserve the integrity of the world’s food supply is by no means over.  The commission continues to France and Greece’s ban on MON 810 and will bring the issue to vote yet again at the end of the month.  Only time will tell whether their sovereign right will be upheld.

Image via Lobo235 on Flickr under a Creative Commons License

Leave a Reply to Uncle B Cancel reply