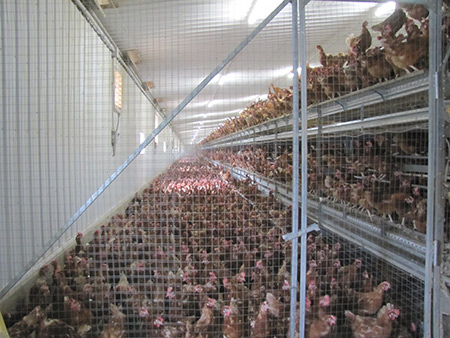 An industrial-scale organic dairy, located south of Phoenix in the desert Southwest, is poised to lose its USDA organic certification. The enforcement action at Shamrock Farms is the result of a USDA investigation into organic livestock management practices that was triggered by a formal complaint from The Cornucopia Institute.

Shamrock operates a massive dairy that was milking approximately 16,000 cows at the time of an inspection by Cornucopia staff in 2008. Between 700 and 1,100 of the cows at the split operation were in the organic milk herd; the remainder were part of a conventional dairy that is part of the same sprawling complex. Shamrock is Arizona’s first-ever certified organic dairy.

“We found inadequate, overgrazed pasture adjacent to their milking facility, and we were told by Shamrock employees that the confined cows had not been out in weeks,” said Mark A. Kastel, Senior Farm Policy Analyst for Wisconsin-based Cornucopia Institute, an organic industry watchdog.

Federal organic regulations require that cows be grazed, and the practice has been a contentious issue in the organic arena. A number of factory-scale dairies — some milking thousands of cows each — have been spotlighted by Cornucopia’s investigations for skirting the law. Formal complaints to the USDA from the farm policy group have led to similar enforcement actions against other giant dairies that they say are “masquerading as organic.”

“As an organic dairy farmer who believes in and follows the law, I am upset that outfits like Shamrock are allegedly cheating and deceiving organic consumers,” said John Boere, a Modesto, California dairy producer who ships his milk to Organic Valley, a cooperative of primarily family farmers. “Over the past few years there has been a surplus of organic milk, which injured plenty of farms like mine. Ethical producers like me could have recovered some of our income if certifiers and the USDA had been doing their jobs,” added Boere.

Shamrock’s organic certifier, Quality Assurance International, has been asked by the USDA to handle the suspension.

“This dairy operation never should have been certified in the first place,” Kastel noted, “and it’s unacceptable that it took more than three years from the time of our complaint to the announcement of this enforcement action. There’s simply no excuse for this level of foot-dragging and procrastination at a USDA administration that proclaimed this the ‘age of enforcement.'”

The Wisconsin-based organization has been increasingly critical of the Obama/Vilsack administration at the USDA for failing to live up to its own rhetoric, and high expectations after appointing widely respected industry participants to run the National Organic Program.

“We filed the formal legal complaint against Shamrock towards the end of the Bush administration,” said Kastel. “This kind of delay, as consumers apparently were continuing to unknowingly buy fraudulent organic milk, is a grave disservice and abdication of the USDA’s congressional mandate to protect the industry from improprieties.”

Shamrock Food Company’s milk and sour cream products are distributed in the Rocky Mountain and Southwest regions and available at such retailers as Walmart.

The Cornucopia Institute, with almost 6,000 members, has more organic farmer-members than any other policy group in the country. On the organization’s website pictures of Shamrock’s industrial-scale dairy can be viewed in the photo gallery.

“At a time when conventional and organic dairy producers are all being squeezed by extraordinarily high feed prices, there is no doubt that large corporate-owned, vertically-integrated operations like Shamrock put downward pressure on farm gate prices,” said Will Fantle, Cornucopia’s Research Director. “If this dairy was indeed violating the law, they have taken profits out of the pockets of hard-working family farmers in the Southwest.”

Cornucopia has also produced an online scorecard for consumers rating all organic dairy brands sold in grocery stores around the country for their adherence to the spirit and letter of the federal law and regulations governing organic food and agriculture.

“The good news for organic consumers in the Southwest, and elsewhere, is that based on our research 90% of all organic dairy brands are produced with high integrity,” Kastel affirmed. “In every market buyers can find organic milk, cheese and yogurt, butter and ice cream that truly respect organic consumers’ values and the federal law. Scofflaws like Shamrock are unfortunate aberrations.”