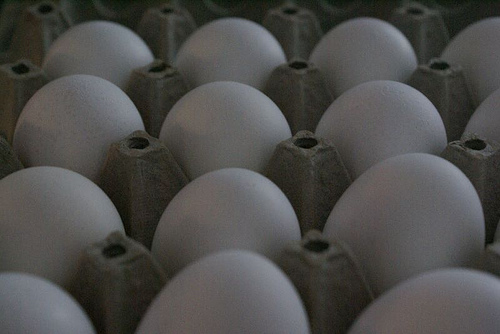 The egg recall expanded to include more than a half billion eggs on Friday. Hillandale Farms of Iowa joined Wright County Egg in recalling shell eggs due to possible salmonella contamination.

To figure out if you have recalled eggs in your fridge, look at this chart. Scroll down to see an illustration of how to read the egg carton.

So far, the egg recalls involve only shell eggs. The salmonella is found inside the eggs, rather than just on the shell. Other egg products, such as egg whites sold in the sealed refrigerated cartons, are typically pasteurized, which kills pathogens.

It is recommended to return the recalled eggs to the store where you bought them.  When cooking any eggs, following certain guidelines can help avoid infection by salmonella.

What’s Next and How to Speak Out for Food Safety

The investigation is ongoing and the FDA is looking at things the two companies have in common, such as employees, chicken feed, or chick sources. According to the Washington Post, Wright County Egg and Hillandale Farms share supplies of young chickens and feed. Also, owners of the two companies co-own Ohio Fresh Eggs, another egg factory farm that has been cited for environmental violations.

Right now, the Senate is looking at the FDA Food Safety Modernization Act (S 510). It would give the FDA the power to make a food recall mandatory. The FDA does not currently have this power. The bill would also require farms to keep records that would make tracing disease outbreaks easier.

The FDA Food Safety Modernization Act has been held up in the Senate because many of the regulations would be too burdensome for small farms. A manager’s amendment has been submitted, so it’s much closer to being ready.

Let your senators know what you think.

Photo by Valerie Everett, used with a Creative Commons license.