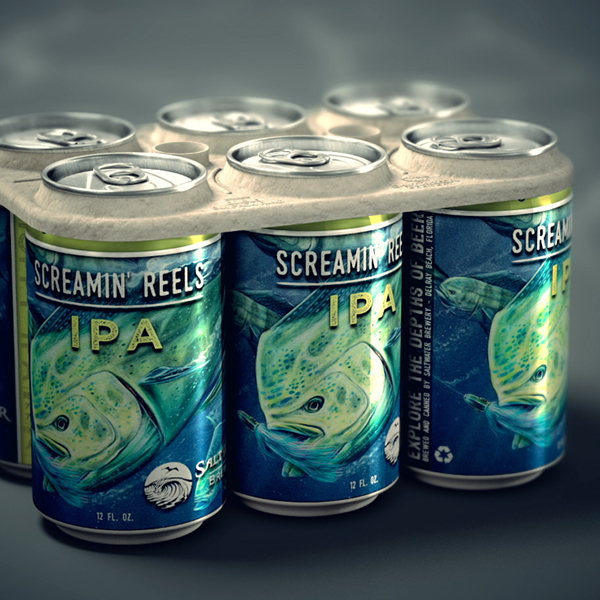 What if you could compost or even eat the packaging that your food came in? One brewery is making this a reality with its new edible six pack rings.

Plastic packaging for beer cans and sodas is a danger to wildlife. It can lead to strangulation if it gets wrapped around an animal’s neck or digestive problems when eaten. Saltwater Brewery of Florida has teamed up with We Believers, an ad agency in New York, to create a new kind of packaging that is 100 percent biodegradable, compostable, edible, and plastic-free. Their exible six pack rings are made out of wheat and barley — both of which are byproducts of the brewing process.

Gustavo Lauria, We Believer’s founder and CC0 says five 3D printed molds were used to manufacture the first batch of 500 edible and biodegradable six-pack rings for Saltwater Brewery. In April, the new packaging was introduced at the Saltwater Brewery Beer Garden and nearby points of purchase. Consumers were able to see that the new design was as strong as the environmentally harmful plastic rings. Some people insisted on taking a bite out of the edible six pack rings.

“It shows that through innovation, the little guys can point the finger at governments and big business to motivate change that impacts our world and the one we will leave for our children,” Lauria says.

Working with engineers at a small startup company in Mexico, the plan is to produce 400,000 edible six-pack rings per month, enough for the current monthly production of Saltwater Brewery. That first mass produced batch will cost between 10 and 15 cents per unit. That’s a small price to pay for a product that won’t harm animals, but it’s still considerably more than what traditional plastic packaging costs.

“If most craft breweries and big beer companies implement this technology, the manufacturing cost will drop and be very competitive compared with the current plastic solution, while saving hundreds of thousands of marine lives,” Lauria says. Until then, consumer demand could convince other brewers and soft drink companies to use the new packaging for their own canned products.

Now that you know about, you can be part of a movement that demands packaging that won’t harm wildlife or the environment.

Republished with permission from Ecopreneurist; image via Saltwater Brewery.