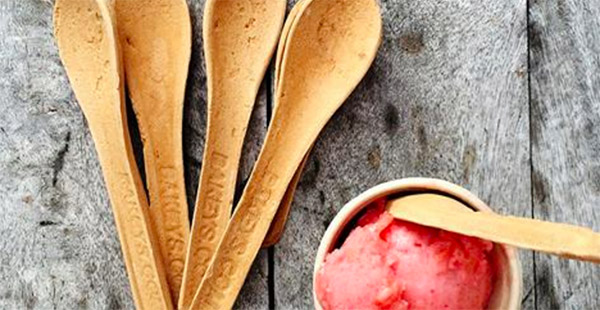 The time has come for edible cutlery, and one Indian company is making it happen deliciously.

In India, 120 billion plastic utensils are thrown away every year. Those utensils end up in landfills or get dumped into rivers that carry them to the ocean. They can take hundreds of years to break down. Narayana Peesapaty thinks that is a profligate waste of resources and a danger to living organisms that may ingest the discarded plastic. His solution? Edible cutlery that he thinks can eventually compete with plastic on price.

Related: Disposable chopsticks are treated with what?

He is the founder of Bakeys, an Indian company that makes a single use spoon from millet, rice, and wheat that can be eaten with the meal. If not consumed, it actually breaks down in record time. For example, the spoon is designed to last only about 20 minutes in hot soup.

The biodegradable spoons are flavored with some of India’s favorite spices: ginger-cinnamon, ginger-garlic, cumin, celery, black pepper, mint-ginger, and carrot-beet. There is also a sugar option for those who crave sweets. Bakeys also makes an unflavored spoon for commercial clients. The utensils have a shelf life of two to three years. Although the spoons aren’t gluten-free because they contain wheat flour, they are free from genetically modified organisms and completely vegan.

Peesapaty created a Kickstarter campaign to fund his business. The original goal was to raise a modest $20,000, but the campaign has already raised more than five times that amount with 14 days left to go. Funds raised through the Kickstarter effort will go toward expanding operations and increasing production. The company has a facility in the works that aims to churn out 800,000 edible spoons each day and they plan to expand to other utensils within a few months.

Because the company is already manufacturing the spoons for sale in India, rewards are promised almost as soon as the campaign ends. A pledge of just $10 will reap a reward of 100 edible spoons in the flavor of your choice. Bakeys edible spoons are a great alternative for home use, but what the company is really after is large commercial customers like restaurants and food trucks. Bakeys is just another example of how creative people can come up with ideas that can benefit the global community.

Republished with permission from Ecopreneurist.