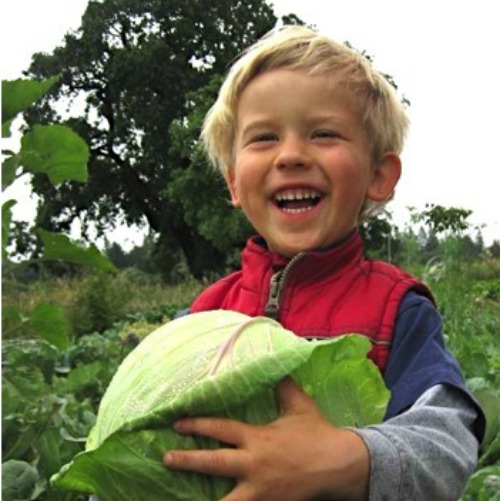 As part of the EcoFarm Conference last week, I had the opportunity to see several local organic farms. The tour was led by Amigo Cantisano, and it included visits to four nearby farms. Cantisano grew up in the region, and as our bus was driving to our various farm destinations, he regaled us with the secret history of the pioneering nurseryman Felix Gillet, and also shared his insights about the land we passed, especially noting the rapid disappearance of orchards and farmlands due to encroaching sprawl.

Our first stop of the morning was in Northern Monterey County, at Rebecca King’s small 40 acre farmstead, one of the only organic sheep dairies in the country. Rebecca makes Garden Variety Cheese, some of the most delicious raw cheese that I have ever eaten. All of the sheep are named for flowers; Mimulus and Hydrangea bleated their greetings to us on our way to visit the farm’s small milking facility.

Rebecca explained some of the ways that her organic dairy keeps their animals healthy, without the use of antibiotics. After being milked, the sheep are given grain to eat to discourage them from lying in the dirt. For a short while after being milked a sheep’s teat will be more relaxed, and more susceptible to picking up an infection; so the time that they spend snacking helps encourage the creatures to remain upright and gives the orifice time to close up, helping to keep their teats clean and prevent the spread of mastitis.

Everyone on the dairy tour had to don protective head and foot wear before we entered the organic cheese making facility. The room was spotlessly clean and was lit with an ethereal golden glow from the wheels of freshly made cheese. The wheels looked like luminescent rising cakes that were alive and lit from within.

We also saw the cheese molds and the salt brine bath, where the wheels float for 2-4 days, to help their flavors develop and the whey to leach out. The whey from the cheese making process is then fed to the farm’s pigs, who also help out with consuming the waste cheese rinds. Rebecca explained that a local brewery also gives her farm their used grains from beer making to help feed the livestock.

Floating in a salt brine is one of the steps in the cheese making process.