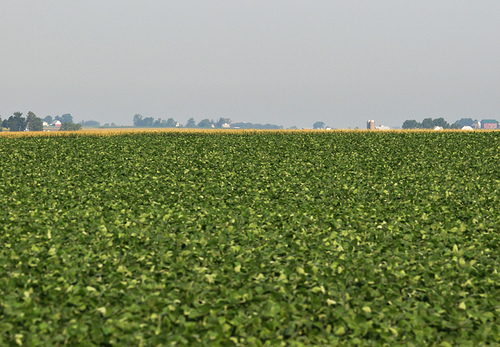 Did you miss the first installment of The Soy Dilemma? You can check out part one right here.

[social_buttons] When you start cutting out meat and dairy, it’s easy to fall into what I call the Soy Trap. Before you know it, you’re eating soy with every meal! Soy milk in your cereal and coffee, soy cheese on your sandwich at lunch time, tofu at dinner. When you’re eating that much of anything, it’s time to step back and evaluate your diet.

Last week we took a look at some of soy’s impacts on our health. Today, let’s talk a little bit about soy’s environmental impact and how to cut back on the soy in our diets.

Soy and the Environment

The most alarming environmental impact associated with soy is its link to deforestation in the Amazon. The impact is far less than that of raising cattle on that land, but it’s still important to keep that in mind when shopping for soy products.

The vast majority of soy in the US is genetically modified to be glyphosate, or “Roundup,” resistant. Glyphosate is a harsh chemical pesticide that’s harmful to fish and wildlife when it runs off of farmland and into nearby waterways. With resistant crops, farmers tend to use more and more of the herbicide over time, as Roundup resistant weeds start popping up. These superweeds are tougher to manage and pose issues for all farmers, not just the ones planting GM seeds.

It’s not that hard to cut back on soy, once you start paying attention to its place in your diet. Try seitan instead of tofu and almond milk instead of soy. There are several soy free vegan cheeses out there, too.

Despite its downsides, sometimes a gal just really wants a tofu scramble. If you’re going to eat soy, it’s probably best to stick to organic products. That helps ensure that your tasty breakfast isn’t responsible for deforestation. Organic foods are also, by definition, not genetically modified.

As far as the health concerns, I’m a big believer in moderation. Soy at every meal? Not a good idea. The occasional vegan quiche? I wouldn’t sweat it.

What about you guys? Are you trying to cut back the soy in your diets?