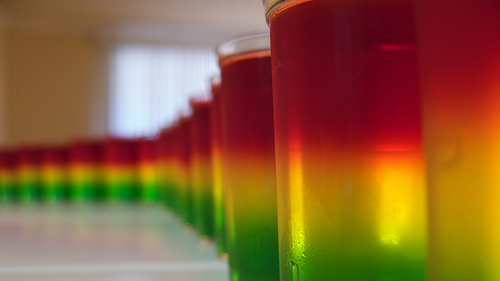 Reader Lisa had a great question about eating vegan:

I have a vegetarian friend and she told me she doesn’t eat jello or gummy bears because some gelatin is made from bone marrow. Is there a vegan friendly alternative?

Sounds a little bit gross, but it’s true. According to Fit Sugar, gelatin is “made by prolonged boiling of skin, cartilage and bones from animals.” You can sometimes find kosher gelatin, which is made from fish instead of cow and pig parts.

Of course, that means that gelatin is not even vegetarian, much less vegan, but don’t fret! You don’t have to give up marshmallows and gummy bears just yet. I’ve rounded up some plant-based replacements for gelatin products.

Before we get into this any further, let’s be honest here: sugary treats are not health food, whether they are vegan or not. That said, everyone likes to indulge from time to time, and if gummy candy is a roadblock keeping someone from trying a vegan diet, we’re happy to help!

It’s actually pretty simple to find vegan versions of most gelatin-containing snacks. Sweet-toothed vegans have done a lot of the legwork already and created some spot-on replacement products. Cosmo’s Vegan Shoppe has a wide selection of chewy, vegan sweet treats. While I haven’t tried them all, I can tell you about the ones that I dug.

Another great option for replacing gelatin is agar, which is derived from seaweed. You can find it in powder or flake form, and according to Cook’s Thesaurus, 3T of the flakes or 2t of the powder will thicken 2c of liquid. Here’s how they recommend using it:

To use agar, just soak it in the liquid for about 15 minutes, bring it to a gentle boil, then simmer while stirring until it’s completely dissolved. The liquid will gel as it cools. Acids weakens agar’s gelling power, so if you’re firming an acidic liquid, use more.

Do you have more questions about eating vegan? Send ’em on! I’d love to hear from you.