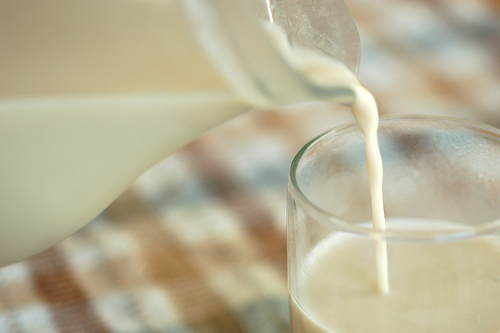 Conventional dairy production is a lot different from the idyllic farms you see in those Happy Cow commercials on TV. Real dairy production forces cows to live in close quarters, involves nasty growth hormones, and is just a pretty cruel business overall.

Milk’s quite easy to cut out of your diet, whether you’re using it to cook or drinking it straight out of the glass. If you’re thinking about avoiding dairy for animal rights or for health reasons, there are a slough of delicious options out there for you!

Soy milk is the most common dairy replacement. Most coffee shops now offer soy milk for your latte, and you can find it in pretty much any grocery store. There are a few problems with soy that you might want to think about before making that switch, though. First of all, soy milk has a sort of beany after taste. It’s something most folks get used to with time, but it’s pretty noticeable at first. There’s also a question about how healthy it is to ingest so much soy. When eating vegan, it’s easy to have soy products at every single meal. With so many other non-dairy milks out there, you might look into some alternatives for your coffee and cereal.

If you’ve got a bit of a sweet tooth, you’ll probably really dig rice milk. It’s got a nice, mellow taste and is on the sweet side. I love rice milk on plain cereal like bran flakes; it takes what would be a boring breakfast and makes it just a little more interesting. Like with all of these milk alternatives, you can use rice milk in recipes just like any other, but it’s a little different in coffee. If you like your coffee on the light side, leave lots of room when you’re mixing in rice milk! I’ve also seen oat milk at the co-op near my house but haven’t had a chance to try it – anyone want to chime in on that one?

It might sound a little hippie dippy, but hemp milk is a super-tasty option. Hemp milk is rich and creamy, and it’s perfect in coffee or in smoothies! It has an interesting aftertaste, which seems to vary by brand. Some folks find the aftertaste unpleasant, so tread carefully if you’re serving this to someone who’s never had it.

There are also a ton of nut milks out there. Supermarkets have started stocking Almond Breeze in big jugs by the soy milk, and it’s one of my favorites. There’s no aftertaste at all, and it holds up well in recipes, coffee, cereal, and smoothies. You can find other nut milks like hazelnut or cashew if there’s a health food store near you. It’s also super easy to make your own nut milk!

Remember Turtle Mountain, who made that coconut based ice cream I reviewed over the summer? Well, they also make coconut milk, which is out of this world. It has a distinct coconut taste, so you might need to choose carefully where you use it. If coconut is your thing, though, I highly recommend giving this a go!

Do you guys have any favorite milk alternatives that I missed?