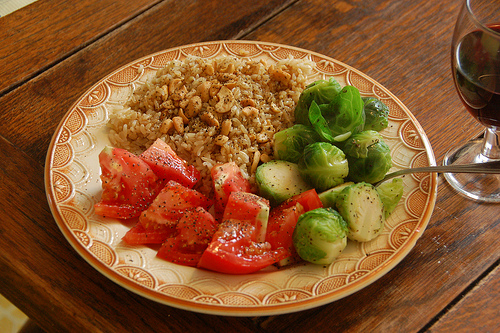 What is umami? Learning a bit about this savory aspect of flavor can help make your vegan cooking even more satisfying!

For the vegan-curious, umami knowledge can help you transition from omnivore to herbivore more easily without feeling like you are deprived.  For current vegans, it will make your dishes more savory and keep your friends coming back to your dinner parties.  For those who have no intentions on giving up meat, the right vegetables actually can enhance your meat eating experience.

To understand umami, imagine the feeling of a piece of perfectly seared Portobello mushroom or slowly pan-roasted chicken melting over your tongue.  Even if unseasoned, these have a taste associated with them that cannot be identified as a combination of the four traditional tastes – salty, sweet, bitter or sour.  This taste is called umami.  It is most often associated with a meaty or savory taste and is the taste that generally makes dishes delicious and fulfilling.

Perhaps why most people are turned off by the idea of a vegan diet is the perceived lack of umami.  People need the umami taste to feel satisfied, and since the taste is mostly associated with meat, it is assumed one will feel unsatisfied without meat.  If you’ve had a good vegan dish, you know that savory vegan dishes exist, but what is it exactly that makes them savory?  Scientifically, the amino acid glutamate is responsible for the umami taste and is found naturally in many vegetables, as well as in meats and cheeses.  The “umami-ness” of a particular food can be measured by how much glutamate it contains.  One of the most glutamate-rich vegetables is ripe tomatoes.  Using ripe tomatoes will instantly add fullness to any dish.  Other vegetables that rank high on the glutamate content scale are mushrooms, potatoes, soy beans, carrots and some seaweeds.  Green tea is also high in glutamate.

Instead of using rice mixed with ground beef to stuff peppers, try using brown rice with cooked tomatoes as the filling for a nice comfort dinner.  In place of cheese on a sandwich, use mashed avocado mixed with a dash of soy sauce.  Soy based add-ins like miso and edamame beans will round out a dish.  Drinking green tea or soy milk can help satisfy a craving you can’t pin down.  Umami can also be artificially added through the use of mono-sodium glutamate, a.k.a. MSG (think bouillon cubes), though the safety of MSG is highly debated and the use of fresh vegetables is much more healthful anyway.

The umami experience is best when enhanced by one of the four traditional tastes, so get creative and try some new combinations!