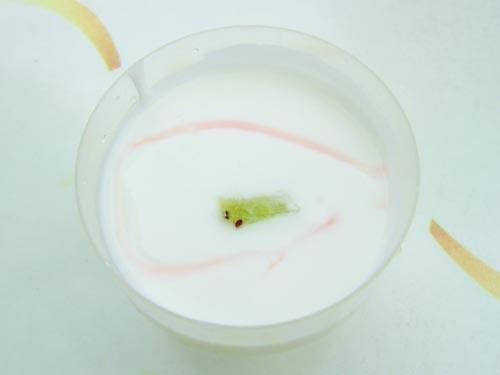 With the recent recall of millions of Salmonella tainted eggs Americans are leery of bacteria in their foods. And rightfully so. However, not all bacteria is bad for our consumption. In fact, we need good bacteria in our intestinal lining to promote healthy digestion.

Take Lactobacillus Acidophilus, for example. It is a type of probiotic that’s present in some foods such as yogurt. All yogurt contain this strain of bacteria and not just ‘certain’ types that you see advertised as being ‘probiotic’. And since most yogurt is pasteurized, live culture is added to the product.

So, how do we get Lactobacillus Acidophilus in our foods and eventually into our gut?

One certain way is through eating fermented foods – foods that went through lacto-fermentation – an ancient method of preserving foods using live bacteria.

Well, according to Sandor Ellix Katz, author of Wild Fermentation, 99.999% of Americans eat fermented foods every day…foods like, bread, cheese, yogurt, miso, sauerkraut, even coffee and tea. Lacto-fermentation, a commonly used process of making foods, occurs in factories producing prepared foods and we don’t even realize it.

We tend to fear bacterial infections and grab the anti-bacterial gel at the thought of being exposed to the “bad guys” but in reality, the “good” bacteria in the gut outnumbers the “bad guys” by 10 to 1. At the height of fermentation, Lactobacilli can multiply to a billion per gram of tissue when the food is submerged in liquid in an anaerobic (without oxygen) state. The bacteria will feed on sugar naturally present in the food and will multiply in such great numbers that they will outnumber the “bad guys” present in the intestine.

If you ever get treated with strong antibiotics for an infection resulting in diarrhea, that’s likely because the medicine has killed off much of the good bacteria in the gut. The remedy for this? Yogurt. Or better yet, Lactobacillus Acidophillus, in live culture form – commonly found in refrigerated sections in health food stores.

Koreans know fermentation very well. Its culture of naturally preserving foods through pickling has been the key method in making its signature dish, Kimchi (or Kimchee). First, salt napa cabbage, then season and store in a tightly sealed jar at room temperature for a few days while fermentation takes places.

Ancient kimchi recipes used ceramic vats buried in the ground over the winter to slow down the fermentation process. Researchers have documented kimchi’s benefits, including a high vitamin content and anti cancer- and anti viral properties. Want to make your own? Check out this simple kimchi recipe.

So, if  you want to balance your intestinal lining or replenish the “good guys” and promote healthier gut, eat fermented foods once in awhile.

Your stomach will thank you.