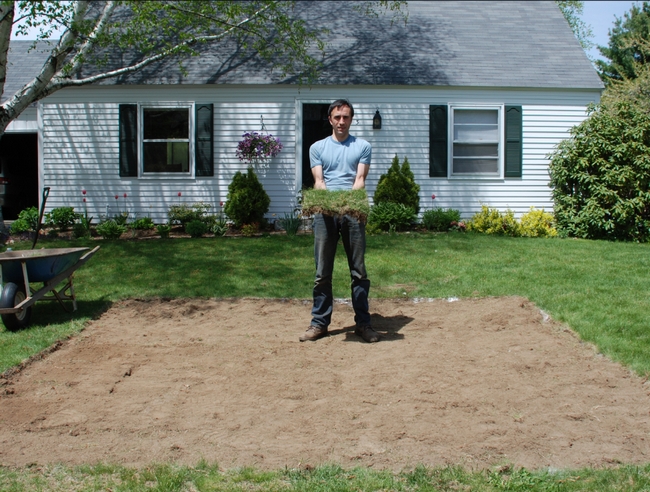 Not too long ago, Eat the View (ETV) founder Roger Doiron wondered here how to push the idea of creating a new White House Victory Garden further into the public sphere. At the time, he hoped to see Obama and McCain say on camera whether or not they’d follow in the footsteps of Eleanor Roosevelt and Woodrow Wilson and allocate a portion of the First Lawn to food production. Thus far neither presidential contender has addressed the notion, but much of the rest of the country is going to learn about it very soon… thanks to the Vimeo.com Climate Matters Video Contest.

Earlier this month, ETV’s clever video This Lawn is Your Lawn, featuring Doiron and his own white house lawn, tied for third place in the online competition. As a result, it will be featured in commercial television spots nationwide this week. Hopefully, the increased visibility of this grassroots initiative will drive even more traffic to the OnDayOne.org petition that seeded ETV last winter.

Another front-burner ETV project generating buzz? The eBay auction of the White House lawn which has to be one of the most imaginative fundraising ideas in recent memory. Basically, bidders “donate” the lawn back to the First Family–and, yes, Doiron cleared the idea with legal eagles!

Doiron stays motivated to carry the ETV torch onward in part to the 4,000 signatures and dozens of inspired comments the original petition has garnered thus far. And if you take a peek at them, you’ll be cheered, too. These remarks coupled with the eloquent and popular Michael Pollan piece, An Open Letter to the Next Farmer in Chief, demonstrate that even in the midst of an economic downturn and a bitter presidential race, ordinary Americans know a good idea when they see it… and they aren’t afraid to say so online.

• An Eat the View Update

• Hail to the Chief Gardener: Sow Seeds of Climate Change at the White House