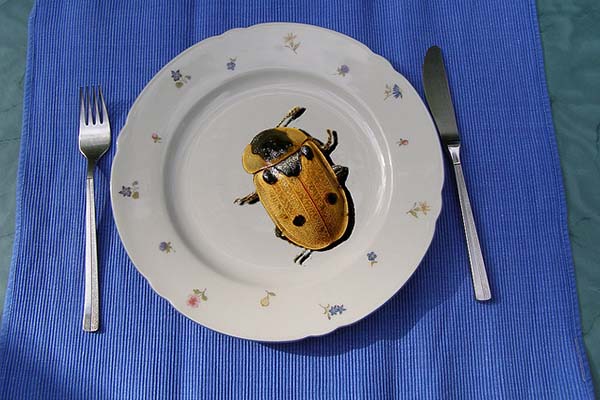 Most people would agree that insects are unappetizing, but did you know that some people actually eat bugs and enjoy munching on them? It’s true – people who consume insects are practicing entomophagy, which is actually more common that you would think.

Many insects are actually a good (and cheap) source of protein, and while most people eat bugs out of necessity, nowadays some insects are also considered a delicacy. Eating bugs could even help reduce greenhouse gas emissions. So pull up a chair, grab your plate, and read on to learn the top 10 edible insects, based on taste and popularity.

Weaver ants eggs are used as a tasty dip or topping for salad and tortilla chips in Thailand. However, they can only be collected one month out of the year, which is a very tedious and painful process. Weaver ants’ eggs are squishy and must be fully cooked before being enjoyed.

Also a popular delicacy in Thailand are Giant Water Beetles. These huge beetles are deshelled and then roasted or fried. Supposedly they taste like scallops. These worms are baked so they have a crunchy texture. They come in a variety of flavors such as BBQ, cheese and Mexican spice.

These large, fleshy, white wood eating moths or beetle larvae are a principal source of protein in the Australian Aboriginal diets. They can either be eaten raw or lightly baked (typically over fire coals.)

Crickets (along with grasshoppers) are a pretty common bug to be eaten. The general consensus seems to be that they have a nutty flavor, although you can buy them seasoned (such as Crick-ettes brand Cricket snacks, which come in three flavors: Salt and Vinegar, Bacon and Cheese, and Sour Cream and Onion.) In the Northeast area of Thailand, egg-laden crickets (in other words, “pregnant” crickets) are considered a popular and tasty snack.

Despite the fact that tarantula’s are arachnids, not insects, they are being included on this list simply because they are so closely related and commonly confused as being part of the insect family. At any rate, oven roasted tarantula is a popular menu item in Cambodia. The fangs must be removed before consuming; simply warm and enjoy. (Or not.)

Casu Marzu is a type of cheese made from sheep’s milk that is crawling with insect larvae, which is popular in Sardinia, Italy. The soft cheese has been fermented to the point of decomposition, inviting insect larvae to develop. Some people choose to pick off the translucent little worms crawling on the cheese surface, while others enjoy the maggots.

Eating termites is a way of life in Africa and some parts of Indonesia. They’re commonly collected at the beginning of the rainy season (when other protein sources are scarce.) Termites taste best after being slightly roasted.

Ants are another commonly consumed insect, although they taste best encased in decadent Belgian chocolate. Giant Queen Leafcutter ants bathed in chocolate are said to have a nutty flavor, boost the immune system and give the consumer extra energy.

We’ve all (probably) seen the suckers housing insects at one time or another. These are a common treat sold across America in shopping malls and candy stores. Examples of insects which you can find encased in hard candy include scorpions (ok, these are arachnids,) worms, grasshoppers and crickets.

While eating insects is pretty much a novelty in our culture, in some places throughout the world it is a necessity. You can eat just about any insect, as long as you give it a good, long boiling first.