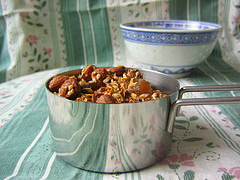 Everybody knows that they should start the day with a nutritious breakfast because it provides energy and gives the body enough nutrients to avoid snacking on unhealthy foods later in the morning, so it can actually help us lose weight. And everybody knows that healthy cereals are usually something we should be eating more of. And many of us are looking at our food budgets and wondering where we can save money.
I discovered this recipe by accident. I always eat breakfast, but don’t like raisins or sultanas unless they are rehydrated, so most packaged cereals just didn’t appeal to me. Then I realised that if I made my own cereal I could pack it with the things I do like: nuts and seeds, and dried apples, and leave out the things I don’t. But making cereal in the oven was complicated and not cheap – it meant standing over a tray of grains, stirring them every few minutes, and even then they would sometimes scorch, and using the whole oven’s heat on low just to crisp grains seemed environmentally insane.

The solution is the crockpot granola recipe! One secret to this is to prop open the lid of your dry crockpot to let the minimal amount of moisture in the ingredients evaporate away. Another is to use a cups recipe as it seems to offer better proportions that weighing the ingredients on a scale, I don’t know why, but it does.

Place all ingredients into your slow cooker and mix well. Cook on the low setting for four to six hours depending on the size and heat of your pot. Remember to stir occasionally – prop the lid open with a wooden spoon to allow for evaporation.

When cooked, tip into a shallow dish or tray to cool and then store in airtight container. You can personalise this recipe a thousand ways. I make one batch with dried apple chunks, a teaspoon of cinnamon and chopped toasted hazelnuts. Served with hot milk this is a real winter warmer. Another contains sesame seeds and chopped pistachios and I tend to eat it with fresh fruit and yoghurt, which gives it a vaguely Middle Eastern flavour.

And, depending on your current breakfast cereal, I’d be willing to bet you’ll save between half and three-quarters of your current spending, and get a breakfast granola that’s tailored to your own preferences. It also makes fantastic granola bars and marvellous flapjacks …