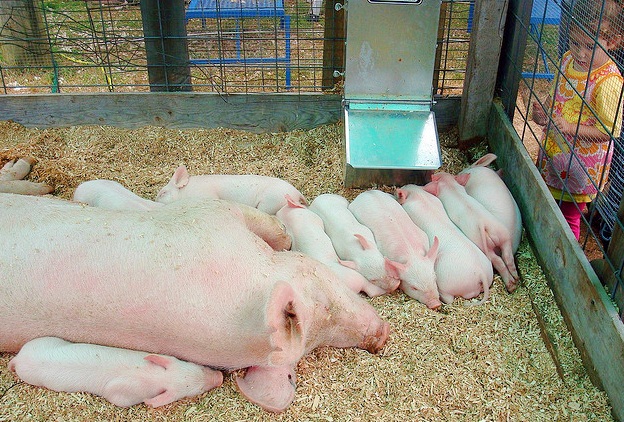 The USDA recently announced a $500,000 grant to develop GMO pigs, even as the demand for non-GMO food skyrockets and the demand for meat decreases. USDA priorities clearly reflect the whim of their corporate biotech and meat industry bosses, rather than the pesky citizens they’re meant to serve.

According to a recent Organic Authority report,

Recombinetics, Inc, the recipient of the USDA funding says its genetic modification will be used to produce female sows and the development of a species that will be designed not to reach sexual maturity. In its grant proposal to the USDA, the company wrote, “Monosexing and infertility can be used to effectively control the dispersion of genetics from engineered animals, [which] will facilitate the introduction of engineered animals into the [food and biomedical] marketplace.”

The announcement comes just as the first GMO salmon looks poised for FDA shoo-in, onto unsuspecting American plates. Comments are being accepted on the agency’s Environmental Assessment for the biotech fish through February 2013, but approval looks very likely.

USDA: Wake Up and Smell the Organic Coffee…

Ironically, US shoppers seem increasingly nonplussed with both GMO food products and meat — both of which our so-called regulatory agencies seem determined to push on the American public, at the behest of their swinging-door BFFs in the biotech and meat industries.

Last November we saw the first GMO labeling initiative hit a US ballot, after two other states (with overwhelming voter support) tried to act on the problem of unregulated genetically modified ingredients in our food supply. Though outspent nearly 6 to 1 by the biotech industry and their consorts, California’s labeling initiative won over 48% of that vote. Right now, at least 13 states are working to require GMO labeling — because a steadily growing number of shoppers don’t want ’em, and would happily avoid GMO products if given a fair choice in the marketplace.

Unlike such socially progressive countries as Russia, Saudi Arabia, and China — and in direct conflict with what US consumers overwhelmingly want — we’ve put the biotech industry itself in charge of GMO regulation. Since we’re not allowed to have actual regulation or labeling of GMO food products, the only way to avoid genetically modified food in the US is to buy organic: and we’re doing just that, in ever-increasing numbers!

As the organic industry enters 2013, the USDA lists 87 accredited certifying agencies, 49 of which are based in the  U.S., and a total of 17,281 organic farms and processing facilities in the U.S. certified to USDA organic standards, a 136 percent increase since 2002. USDA’s most recent survey shows organic acreage has grown to 3,648,896 acres, a growth of 89 percent since 2002 (4).   The OTA reports current industry sales at $31.5 billion, a 9.5 percent growth  rate over the prior year… [emphasis mine]

… And While You’re At It, Smell the Vegan Coffee-Cake!

While non-GMO foods steadily gain in popularity, demand for meat steadily declines — which the USDA knows full well. As reported by Counting Animals a few weeks ago,

The USDA, on November 16, released its most recent forecast  of meat production and consumption through the rest of 2012 and the year 2013. These projections indicate a continued decline in the per capita consumption of all four major meat categories: beef, pork, chicken and turkey.

Thanks to animal welfare organizations like HSUS, Compassion Over Killing, and Mercy For Animals — and their gut-churning undercover investigations that all too frequently reveal routine and ongoing hideous animal abuse — more and more people are coming to understand the misery behind their CAFO-burgers, and choosing to eat other things.

From a health perspective, popular media like Food, Inc., Fast Food Nation, and Forks Over Knives have improved public understanding of the link between plant-based eating and human health — with high-profile plant-eaters like Bill Clinton, Alicia Siverstone, and Ellen DeGeneres helping to normalize non-meat-eating habits in popular culture.

Even Big Ag meat producers see the writing on the wall, and are raising less pigs for US consumption due to declining demand — as summed up by Agweb.com:

But instead (as usual) USDA caters to its Big Ag pupeteers, and funds GMO meat production — which no one needs, and only industry shareholders want.

The Opposite of a Good Idea

As a nation, we suffer primarily from health problems linked to overabundance of animal products: cancer, heart disease, stroke, diabetes, osteoporosis, and obesity are all influenced by excessive consumption of meat and other animal-based foods. There is certainly no dearth of access to pig flesh, if people choose to eat it — thanks to the atrocious practices of industrial animal farming, there’s more cheap pig meat in the US than you can shake a bolt-gun at, if people want it.

But with increasing incidence, they don’t!

Our nation is already obese, sick, and dying from overindulgence in double bacon cheeseburgers. People want less and less pork, but more and more non-GMO food. With that in mind, does anyone actually think GMO pigs are the answer to any question worth asking?

Biotech proponents like to wax rhapsodic about how they want GMOs to feed the world, but projects like this reveal the total bunkery of that argument: the goals involve corporate profit, plain and simple. No one suffering from the chronic diseases of excessive meat consumption in the US — and certainly no one starving in Darfur or Haiti — stands to benefit from nonreproductive GMO pigs.

The USDA proves once again with this GMO pig grant just whose interests it serves — and my friends and fellow citizens, those are not ours.