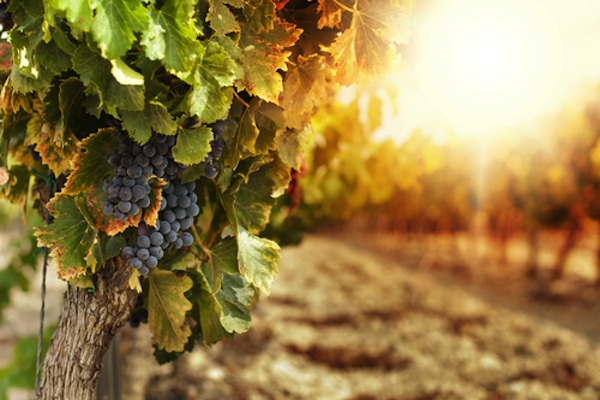 True or false? For grapes to grow, farmers must water them.

False! I just learned about an unexpected farming technique called “dry farming”. It’s not a new technique, going back to ancient Mesopotamia, Egypt, and northwestern India. Even in America, farmers in Utah have been raising crops without applying water since the 1800’s. And William McDonald published a book in 1909 on the subject: “Dry-Farming: Its Principles and Practice“.

So what’s the scoop?

Dry farming, also called dryland farming, is the practice of growing crops during a dry season using residual moisture in the soil from the rainy season. With the right type of soil, excess rainwater soaks in deeply, holding in moisture. Plant roots then seek out that moisture as they grow. Lack of watering at ground level forces them to penetrate more deeply than they normally would, allowing the plants to thrive without irrigation.

Dry farming is used frequently to produce grapes and olives. The California Agricultural Stewardship Initiative notes: “In addition to grapes, we have found that tomatoes, pumpkins, watermelons, cantaloupes, winter squash, olives, garbanzos, apricots, apples, various grains, and potatoes are all crops that are successfully dry farmed in California.” I learned there are a number of vineyards and orchards along the California coast that have never been irrigated! And that “old vine zinfandel” you see at the wine store often refers to wine from dry-farmed grapes on rootstock that is more than 50 years old.

The benefits of dry farming are dramatic. Most importantly, dry farming produces fruits and vegetables that are more nutritious and flavorful than those grown with traditional farming techniques. Restricting a plant’s water intake results in fruits that have less water in them and a greater density of sugars and other flavor compounds. Apparently, dry-farmed tomatoes have become a serious attraction at the Whole Foods in Sebastopol, about 50 miles north of San Francisco.

There are other benefits: Farmers without access to water sources for irrigation can still produce fantastic crops. Energy used to transport and pump water for irrigation goes unneeded as do the funds to set up expensive irrigation systems. And with a growing global population, demand for water will increase, making water conservation more critical — with 70% of fresh water currently being used for agriculture, dry farming can have a positive impact.

One downside of dry farming is a lower produce yield. A recent NPR blog post on the subject quotes farmers as saying dry-farmed fruit trees may produce 12 to 15 tons of apples per acre per year, compared to 40 to 50 tons with irrigation.

But apparently, once you’ve tasted a dry-farmed tomato, it will change your life. The famous California wines that won the 1976 Paris wine competition (deemed the “Judgement of Paris”) were all dry-farmed. I’m now obsessed with finding some of this dry-farmed stuff.

Have you seen dry-farmed fruits or veggies in your area? Ever tasted a dry-farmed tomato? Share your experience, please!