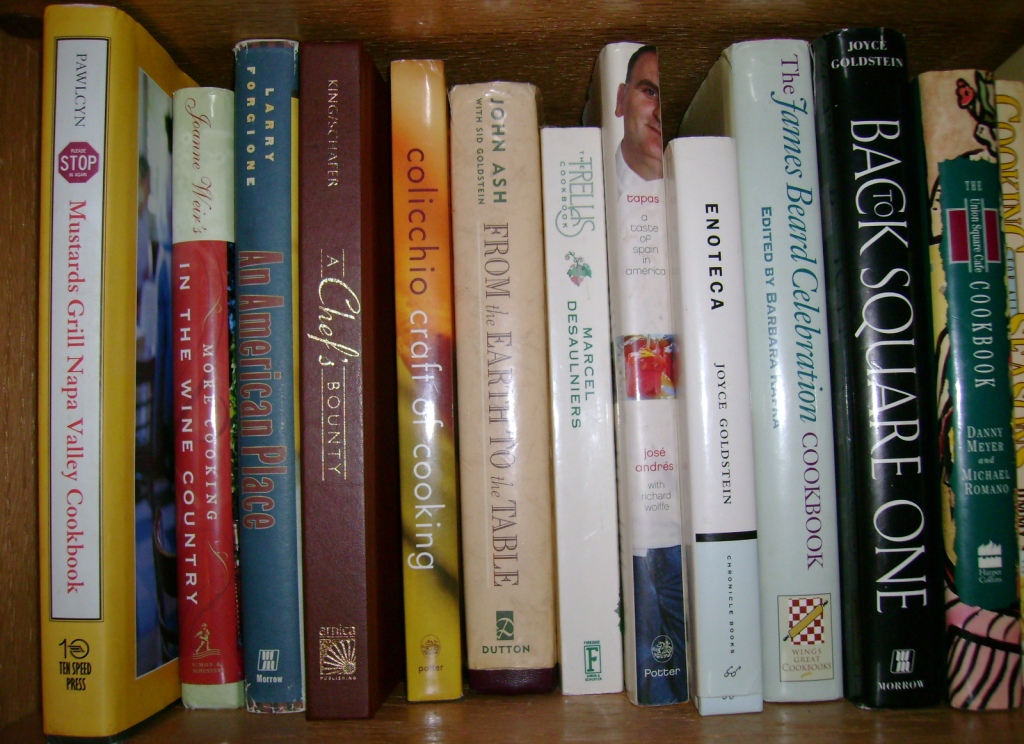 The people over at Slashfood turned me on to an article from the Wall Street Journal entitled Publishers Bet Big on Cookbooks. the gist of the article is that even though people maybe cutting back on luxuries like eating out, the tanking cookbook publishers are counting on all of us to buy their product – especially during the upcoming holiday shopping season. By the way, I hate to be the one to tell you this but there are only 69 shopping days left until Christmas.

My question is, Do publishers think we’re stupid?

First, there are dozens of cookbooks (some I can’t even call cookbooks) named after various culinary TV shows (some I hesitate to call culinary) designed to get us simply to watch the show or pour more money into a producers pocket (not that this is necessarily a bad thing).  Books like Rocco Gets Real: Cook at Home Every Day, Martha Stewart’s Cooking School: Lessons and Recipes for the Home Cook , Biggest Loser Family Cookbook: Budget-Friendly Meals Your Whole Family Will Love, and any book related to anyone on the Food Network like Diners, Drive-ins and Dives: An All-American Road Trip . . . with Recipes! Do you really waste your money on this schlock?

Second, author Michael Ruhlman nailed it when he wrote:

(New York, New York – September 2008) This October with the release of French cookbook author Sophie Dudemaine’s newest title, Ducasse made Simple by Sophie, home cooks will be able to effortlessly recreate the world-class cuisine of renowned Chef Alain Ducasse in their own kitchens.

But really it was this statement angered me most: “home cooks will be able to effortlessly recreate the world-class cuisine of renowned chef Alain Ducasse in their own kitchens.” It’s this kind of claim on which many cookbooks stake their reason for being and that I find fundamentally dishonest-that anyone can do this food quickly and easily, and, that quick and easy are what we most want in a cookbook from a Michelin-starred chef.

What I’m criticizing here is the conceit of this cookbook, and all others that claim to make refined cuisine simple for the home. It makes me crazy not because it’s fundamentally a lie, though that’s never a good thing, but rather because publishers don’t seem to recognize that it’s a lie, and they want to keep on telling it to us.

I’m with Micahel when he askes, “Do people actually believe this?”

Third, food writer and critic Robert Sietsema wrote a piece in November 2005 in the Village Voice that summed it up.

No reliable scientific study has yet demonstrated that people who get cookbooks for Christmas actually cook anything with them. But think of all the other things cookbooks do for us. They brighten up a kitchen. They also keep us slender, since most recipes are best enjoyed by gazing at the color pictures, the same way sex can be enjoyed by flipping through the pages of Playboy.

So if this is making you little depressed, the Shark Guys have have come across something to help us all out.

Need a little something to nosh on while you watch the financial markets collapse? Well prepare to lick your chops as the author takes you back to the culinary highlights of an era when everything did turn to shit – Depression Era Recipes.

Don’t look to this for recommendations on things to eat, but if you want to relive the highlights of one of the darkest periods in modern history, then this is the book for you. A new edition featuring “Sub-prime mortgage cheese melt,” and “Ben Bernake Baba Ganoush” may soon be in the offing.

You gotta love these guys!