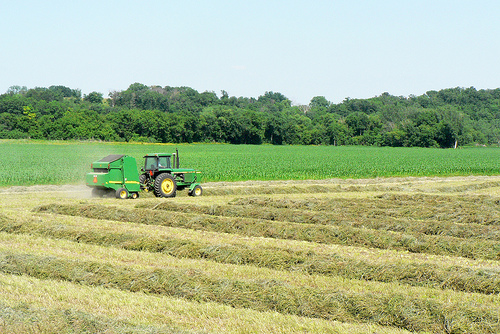 The Economist magazine is sponsoring an online debate about whether biotechnology is sustainable. It’s not quite the same old GMO vs. organic farming argument. The Economist has rounded up some of the top people in the field to state their position for or against. There’s room there for your own rebuttals and arguments, if you choose. And there’s a poll.

Articles in the Economist that discuss agriculture usually (perhaps always, I haven’t read them all), come out on the side of big agribusiness. Genetically modified crops fit right in with big business.

The debate, however, looks even-handed. The people arguing for including genetic engineering in sustainable agriculture are heavyweights in the field. Pamela Ronald is professor of plant pathology at the University of California, Davis and is married to an organic farmer. She starts off the debate by arguing that GM crops and organic farming techniques can work just fine together.

Among those against blending the two, Charles Benbrook is the chief scientist at the Organic Centre in Oregon, who argues that small farmers account for most of the world’s food production.  Helping them is feeding the world.  He also points out that 84% of genetically-engineered crops have been engineered for herbicide-tolerance.

That’s not his only point, but it’s one I consider to be a significant point. For twenty years I’ve been hearing that the only way to feed the world is with GM crops. Most of what we’ve gotten has been herbicide-tolerant crops that don’t yield as much as conventionally-bred crops. We’ve also gotten crops like the soybean that lacks Omega-3.

That golden rice with the vitamin A that’s going to save the impoverished children of Asia and Africa? It’s coming. Any day now. Just you wait. And keep waiting.

There’s a lot more there. I encourage you to go check out the debate and express your opinion. The level of comments there is quite good and I learn as much from some of the comments as I do from the debaters.