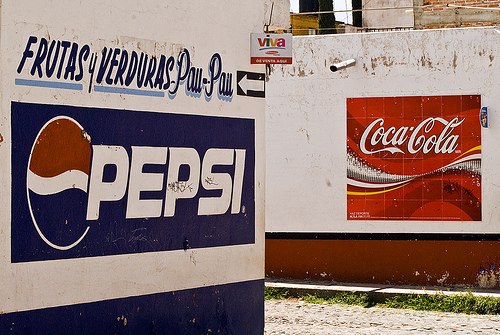 [social_buttons]
I don’t drink sodas primarily because they contain high fructose corn syrup (HFCS).  Apparently, I am not alone in my concern over HFCS, as cane sugar sweetened Pepsi and Coke from Mexico are desirable in the United States.  I’m not sure I would risk Montezuma’s revenge from Mexican water to drink a sugar cane sweetened soda from south of the border; however, the long term negative effects of HFCS may be far worse.  Unfortunately for natural soda lovers, Mexican Pepsi and Coke are illegal in the US.

PepsiCo defends its lawsuit, because the Mexican labels do not comply with Food and Drug Administration or PepsiCo standards for the United States.  “The Mexican product is neither authorized nor intended for exportation out of Mexico,” explained Pepsi in the lawsuit.  This is the second time Pepsi has filed lawsuit against a US distributor for selling sugar cane sweetened Mexican soda.

Why isn’t Pepsi made in the United States with sugar cane?  According to the Atlanta Journal-Constitution:

Mexican versions of Coca-Cola and Pepsi have found a niche market in the United States both with Hispanic and non-Hispanic customers primarily because they use cane sugar as a sweetener. Most major beverage-makers switched to high-fructose corn syrup in the 1980s for their U.S. sodas, but the Mexican government has adopted policies that have encouraged the use of cane sugar in Mexico.

It sure makes one wonder about the power of the HFCS lobby.

Image: larry&flo on Flickr under a Creative Commons License