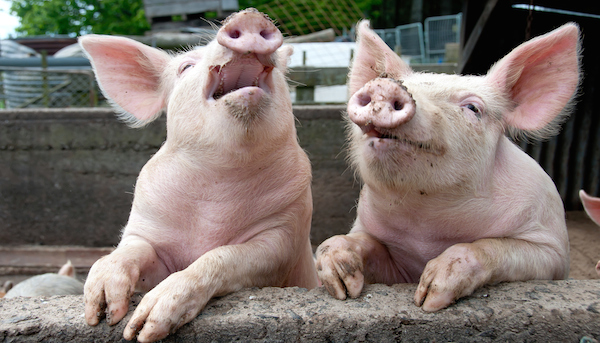 It’s Blog Action Day, and while I generally cringe at putting my name next to anything promoted as a “blog”, this is a worthy cause as the theme is “inequality.” As someone who has been a vegan and animal rights activist for more than 20 years, writing about inequality in our food system is a no-brainer. It’s an important topic to discuss. From the food deserts, to the high price for healthy food, to the tons of it going into the trash while millions go hungry. But no issue is more pressing and more ignored than eating animals.

We hear a lot about veganism lately—much more in recent years than I could have ever imagined as a teenager twenty-some years ago when I first came out of the refrigerator as a vegetarian and then vegan. Back then, I just assumed I’d forever be labeled as that girl, the one who people would assume had an eating disorder disguised as a diet fueled by animal rights. Many things have changed since those days. Many, sadly, have not.

Yes, it’s fantastic that Beyoncé, Jay Z and J-Lo have all experimented with the vegan diet. Russell Brand and Moby bring it well-deserved attention too. So does Bill Clinton, and now, even Al Gore. But it has also become just another food label of late, like gluten-free, low-sodium, or the dreaded ‘Paleo’…all these quasi diets that translate to “difficult to feed” in the eyes of “normal” American food eaters.

We know now scientifically that consuming more plants is our best defense against premature aging, diseases like cancer, heart disease, diabetes and depression. When it comes to the issue of global warming (which was Al Gore’s motivation for going vegan), we can no longer ignore the impact meat, eggs, fish and dairy have on our planet. Whether or not you’re moved to stop eating bacon once and for all because of the egregious veal stall-like conditions gestating pigs are forced to live in, you simply cannot continue to look the other way when our planet is showing the irreversible signs of a rapidly changing climate and the risks that poses for all of us. Or to put it another way: you have to stop eating so much meat if you want to live long enough to eat more meat.

Part of our problem with our animal food addiction is how divorced from the animal these foods are once they’re cheesy-flavored in foil bags lining the aisles of our supermarkets, or packed by the dozen into buckets and coated in crispiness. I once had an actual doctor offer me McDonald’s chicken nuggets—knowing I was vegan—because he was convinced that they weren’t “made from real chicken. We can no longer afford to be so grossly uninformed about our food. We can’t do it for our health and we can’t do it for the planet.

But that’s not the real issue of inequality here.

Our real misstep is in continuing to look away from the suffering—hardening ourselves to the horrific reality each and every animal suffers before they’re eaten in part or in whole. It is the biggest collective lie on our planet, indulged because it’s so massive, so awful, so unforgivable, that most people would rather ignore it for their entire life than confront and accept it and choose otherwise. It’s an injustice of unrivaled proportion. When animal rights activists compare factory farms to concentration camps, they’re not exaggerating. There is a war against our fellow earthlings that must stop. And it may have to happen just one bite at a time, but if we are to survive as a species, we must let our dominion over animals be a flavor we outgrow.