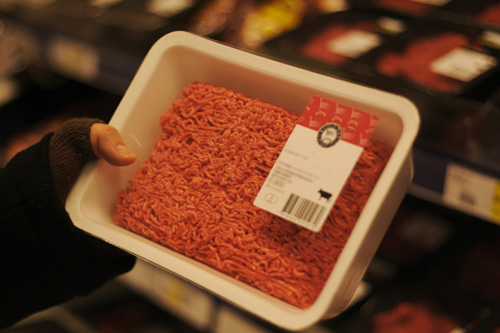 Would you like the choice to have food from farms where animals are treated respectfully, and farmers use ethical and environmentally friendly practices?  Or do you want to be forced to buy meat that comes from factory farms with wasteful and environmentally damaging practices, where animals are loaded with hormones and antibiotics, and forced to huge feedlots to fatten up quickly?

It turns out that consumers don’t have much choice, as a few meat-packing firms dominate the business.  By the time those neat little meat packages get to the grocery store for your consumption, major choices have already been made for you…and guess what, you’re probably going to get the meat from the hormone-laden animals.

The meat-packing playing field needs to be leveled for consumers to have more choice.  The USDA is taking a good first step towards increasing fair competition in the meat industry, but it is undercut by Congress succumbing to industry pressures.  Read more about what you can do to increase your choices:

Rich Bindell from foodandwaterwatch.org wrote a thorough blog about problems with fair competition in the meat industry.  You can find it here.

He mentions that this is not a consumer problem that can be solved simply by buying an alternative product in the grocery store.  Consumers don’t really have the luxury of choice here, because small farmers do not have equal opportunity to sell their animals to meat-packers.  If they do get the opportunity, the meat-packers actually pay small farmers less than they pay large factory farm feedlots for animals, but the consumers do not see the savings.

On August 27, 2010, the USDA and Department of Justice will hold a workshop about this problem.

Sign a petition to express your concern about the lack of competition in the food industry: http://action.foodandwaterwatch.org/p/dia/action/public/?action_KEY=2535

Write a letter to your senator and tell him/her to demand fair competition: http://www.senate.gov/general/contact_information/senators_cfm.cfm

If you are a small farmer, join R-CALF in their protest at the USDA/DOJ workshop in Fort Collins, Colorado on August 27, 2010: http://www.r-calfusa.com/Events/100827-Colorado.htm

See if you can find a farm that raises, slaughters and sells their own meat in a way that meets your standards: http://www.localharvest.org/

Forward this information to others.  Many people may not even realize they are being denied choice in food.