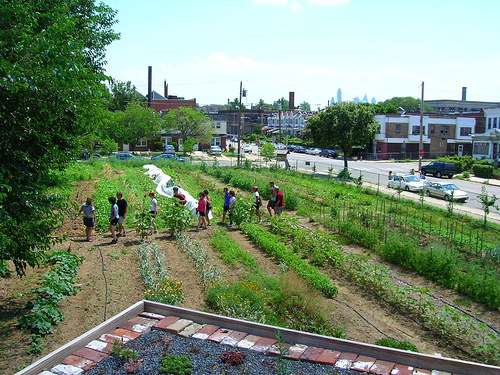 According to the Population Reference Bureau, nearly 80 percent of you probably live in an urban area. Some of you may be lucky enough to have a weekly farmers market in a nearby city park or square, but I wonder if you’ve ever thought there might be an actual farm near you. Over the past decade, a growing number of urban agriculture projects have taken root in major North American cities, making it possible for urbanites to get in on the sustainable food movement in at a whole new level. Typically not more than an acre or two, these city farms are redefining traditional cultivation practices and communities alike.

Defining Urban Farming
So what is an urban farm? Since they’re often the size of large gardens due to land constraints within city limits, let’s first define the difference between a “farm” and a “garden”. According to Webster, a farm is “a tract of land…on which crops and often livestock are raised for livelihood.” A garden, on the other hand, is “a plot of ground…where flowers, shrubs, vegetables, fruits, or herbs are cultivated.” While one is a tract and the other a plot, the real difference between a farm and a garden is the expectation of turning a profit from the produce being grown. Thus, an urban farm can be loosely defined as an agricultural pursuit taking place within the boundaries of a city with the intent to sell what it harvests.

Still thinking the idea of a farm in the middle of the city is a little odd? While it has required some unconventional/creative methods, farming in the city really isn’t that unusual. Urban agriculture has been used by the United Nations in many developing countries to encourage a healthy food chain and to generate jobs in the poorest cities of the world. Conversely, a few enterprising Canadians started farming their backyard and their neighbors’ backyards two decades ago with the mission of reconnecting North Americans to sustainable farming methods. As a direct result of their labors, new methods for intensive planting and harvesting in order to generate much greater yields from small plots of land (called “SPIN” farming) have been developed to make farming in the city not just possible, but quite often profitable. Identifying a Few Urban Farms
Across the U. S., there are highly original and productive projects popping up, from Growing Home in Chicago to Red Hook Community Farm in NYC. Since I live in Philadelphia, America’s 5th largest city, I’ve been fortunate to be involved with a number of urban agriculture projects in various stages of development here. Greensgrow, a farm that largely uses hydroponic growing methods, was established in 1998 and continues to be a pioneer for urban farming. The Philly Orchard Project is a fledgling undertaking with the potential to provide city neighborhoods with fresh local fruit by planting trees in vacant lots.

Weavers Way Farm is somewhere in the middle of its journey and a good example of how urban farming not only grows good food, but also touches so many lives. An outgrowth of the beloved Mt. Airy institution, Weavers Way Co-op, the farm was established in 2000 by the late Norma Brooks and her friends from the Co-op. With much foresight and dedication, this group of Co-op members volunteered their time to create a veritable Eden out of what was then the unruly “northwest tract” of Awbury Arboretum. Today the farm employs two full-time staff and several interns and has expanded its acreage of organically grown crops to included more than 75 varieties of unique and heirloom vegetables.

Surrounded by a neighborhood typically rife with urban blight and crime, the farm is providing truly fresh produce to a community that has little exposure to its food sources. Through educational programs with local schools and donations to City Harvest, a nonprofit distributing produce to those less fortunate, Weavers Way Farm has had a real impact and envisions many more outreach programs, both with children and adults.

Get Involved
These have been just a few examples of the many growing projects that are out there. Do you know of an urban farming project near you worth mentioning? Tell us about it! If you are unfamiliar with urban farms, a good starting point for finding one is through the directory on www.localharvest.org. Once you find a nearby urban farm, go for a visit. I have no doubt you’ll be inspired by the intimacy and beauty of getting involved with the origins of your food. Not to mention, you’ll be amazed at how sweet carrots pulled right from the dirt taste!