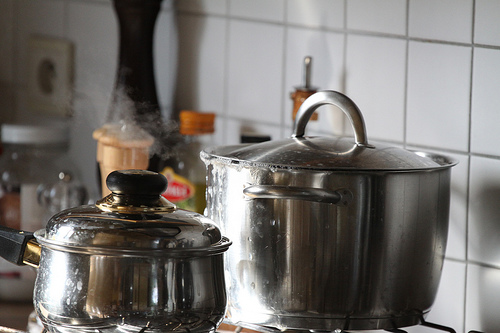 Every wondered about some of the conventional cooking wisdom that makes the rounds? Addages like “hot pan, cold grease, no stick” and the idea that all of the alcohol cooks out of boozy dishes have been around for ages. Peter Aitken takes on a slough of cooking myths, some of which are quite surprising! Here are a few food myths that stood out:

When you add alcohol to a recipe it all evaporates during cooking so there is none in the final dish.

Here’s another “common sense” myth that turns out to be false. Alcohol has a lower boiling point than water so it should all evaporate first, right? Nope – that’s not the way it works. The alcohol will evaporate faster than the water but there will still be some left after even extended cooking.
[…]
The bottom line is that no one is ever going to get tipsy from alcohol in a cooked dish, but people who want to avoid all alcohol for religious or medical reasons need to be aware that some alcohol will remain even after long cooking.

He’s got a handy chart of common preparation methods and the residual alcohol on the kitchen myths page.

This myth got its start a number of years ago when medical researchers found elevated levels of aluminum in diseased tissue from the brains of Alzheimer’s patients. One logical possibility (but not the only one) was that the raised aluminum level was responsible for causing the disease. Get exposed to too much aluminum, from your job perhaps or your cookware, and you would have a better chance of coming down with this awful disease. People started avoiding aluminum cookware, and some still are – unnecessarily it turns out. Subsequent research has failed to show any connection between aluminum exposure and Alzheimer’s, and it is believed that the elevated aluminum in the brains of Alzheimer’s patients is a result of the disease process. In other words, high aluminum levels do not cause Alzheimer’s, but rather Alzheimer’s causes high aluminum levels.

He also attacks the myth that cold water boils faster than warm water, which I’d never heard before. This one comes with a warning: “Note, however, that many people generally avoid using hot tap water for cooking on the theory that the hot water is not as clean from sitting in the water heater or from leaching substances from the pipes (a worry in houses with old plumbing).”

Want to check out the whole list? Head on over to Aitken’s site!

What are some cooking myths that you’ve wondered about? Were any of the things on his list a surprise to you?

Becky Striepe is a green blogger and independent crafter with a passion for vintage fabrics. She runs a crafty business, Glue and Glitter, where her mission is to use existing materials in products that help folks reduce their impact without sacrificing style! She specializes in aprons and handmade lunch bags.