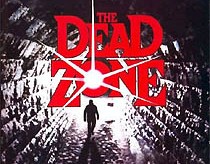 With apologies to both Stephen King and Verizon Wireless, the “real” Dead Zones we need to talk about are hypoxic (low-oxygen) areas in the world’s water systems that can no longer support aquatic life. As Joshua Hill, over at Plantsave has eloquently said,

Dead zones are created, in the beginning, by nitrogen (among other things). Nitrogen is the byproduct (in this instance) of natural gas transformed in to ammonia fertilizer, which is then spread across the agricultural landscape of many western and emerging nations.

From there the runoff makes its way to streams, then rivers and finally the oceans. It is at this stage upon reaching the ocean that the real trouble begins. The increase of nitrogen in the waters fuels the increase of algae which subsequently absorbs exorbitant amounts of oxygen, making life unbearable for most creatures…

Dr. Robert Diaz, a marine biologist and professor at the Virginia Institute of Marine Science said, “The drastic changes to the ecosystem have eliminated entire species in some parts of the world and hurt many coastal fisheries.  [Marine life is] forced to move to the surface away from the dead zones, stressing them and making them more vulnerable to prey, which reduces their populations.”

The main person the dead zone affects is the fishermen

Besides the environmental impact of massive fish kills, altered migration patterns, reduced reproduction rates, and destroyed marine habitat, there is a huge cost to the fishing industry. These environmental factors affect and reduce the number of fish available to be caught. When fewer fish are available in an area, fishermen will to have to spend more time and effort in fishing areas farther away to keep up yields. Because fishermen are having to go farther to fish, they are forced to spend more money on additional fuel, machinery, and labor costs. This in turn affects the amount of income that the fishermen will receive. As Dr. Diaz stated, “I’m convinced this is going to be the biggest environmental issue in the aquatic marine realm in the 21st century.”

But there is some good news.

Leon Panetta, Chair of the Pew Oceans Commission and former White House Chief of Staff put forth a basis for a solution,  “We need to approach the ocean on a ecosystem basis-relating what happens on the land and on the rivers to the ocean. To do that, we need regional councils that bring together federal, state, and local officials as well as fishermen, scientists, environmentalists, and business leaders in order to develop a plan.”

Additionally, I believe that we need fair and equitable representation in decision-making processes. Successful management bodies must be composed of a truly diverse group and avoid domination by one sector of the industry. Those management bodies must be broken up into smaller regions. Fishermen from Florida have little in common with fishermen from Oregon, the Texas gulf coast or the Louisiana bayous. Each should be managed separately.

Pietro Parravano, President of the Pacific Coast Federation of Fishermen’s Associations summed up the fishermen’s point of view,

While we have done much to control fishermen, we have done little to control those who have destroyed fish habitat. We need to protect our fishing grounds, not lock them up. Protecting our oceans and coast is more than stopping pollution and regulating fishing.

In our vision of sustainable fisheries and coastal communities, we need to increase our knowledge of the oceans. This means more collaboration between fishermen and scientists, those who harvest from it and those who study it.

To have a vision, one must be a visionary. I urge all of you to be visionaries about our coasts worldwide. Make it a place where there are fishing communities, fishing boats, productive ecosystems, where the water supports diverse populations of marine life, where fishing men and women work together with those exploring the ocean’s mysteries, a place where our children and generations to follow can find happiness, solace, and a connection with nature.

Do we have the political will to see it happen?

For more information, take a look at the Pew Charitable Trust’s A Dialogue on American Fisheries.