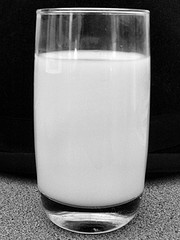 Gooey melted cheese on pizza, a glass of cold milk with freshly baked cookies, ice cream on a hot summer day… who hasn’t at one time or another enjoyed something made from milk?

Dairy products are part of most American diets on a daily basis, but what is the health and environmental impact of this high demand for milk?

The production of much of the milk in this country is done in large scale-operations, some having thousands of cows.

That’s a lot of manure to be dealt with, this reduces the air quality (especially for people living near the dairy operation), and consistently finds its way into our rivers, streams, and groundwater.

How about the huge amounts of methane being released by cows?  Methane gas makes the second biggest contribution to global warming (carbon dioxide is number one).  The digestive process of cattle is one of the major sources of methane emissions.

Unless you eat and drink only organic dairy products, odds are the cows who produced the milk you’re consuming were given recombinant bovine growth hormone (rBGH).  For over ten years rBGH (also known as rBST – recombinant bovine somatotropin) has been a staple in American dairy products.  Companies are not required to label products containing this hormone, so most consumers have no idea they’re consuming it.

The intent of rBGH (which is manufactured by the Monsanto Company…aka public enemy #1), is to make dairy cows more productive, but it often leads to significant health problems.  The most common problem is severe udder infections (mastitis).  Because of this, dairy farmers must use more antibiotics to combat these infections.  These antibiotic residues contribute to the growing number of antibiotic resistant bacteria, making it more and more difficult for some antibiotics to fight infections in humans.

Some studies have also shown that rBGH residue in dairy products can increase the risk of certain cancers such as breast, prostate, and colon.  Because of this, rBGH has been banned in European nations and Canada.

These are just a few of the many problems associated with dairy production and consumption.

What we, as consumers, need to ask ourselves is this: